This week was an embodiment of all the reasons I came to Cork, and UCC in particular, to study...

In the beginning of the week, the other Masters students in Film & Screen Media and I bonded at a local trivia night. We did not even come close to winning, but nevertheless we all grew closer as we discussed our backgrounds, cinematic tastes, and motivations for the degree. It’s a very small program—only eight students, to be exact—and we are all around the same age.

Before starting the course, I was nervous that we wouldn’t have much in common or that I wouldn’t be as experienced or knowledgeable as everyone else. I also feared that my classmates wouldn’t be interested in socializing, because so many people warned me that the postgraduate experience is socially “different” from the undergraduate one, and that people wouldn’t be as focused on making friends.

I can’t speak for every postgraduate student, but the negative experience I anxiously envisioned could not be any further from reality. Everyone in the course is equally interested in getting to know each other. Furthermore, although we all have diverse strengths, interests, and areas of expertise, we are all committed to learning from one another. The course is also filled with so much detailed information that we can feel ourselves growing and being challenged each day. Our professors have fostered an environment in which we are all equal, and constantly aware that our projects and experiences will be made better through teamwork rather than competition.

This week, I also attended a special screening of Alan Gilsenan’s The Meeting, which was followed by a Q&A with Alan and two of the film’s stars, Ailbhe Griffith and Kevin McCormack. The Meeting is Ailbhe’s own story: She was violently raped in 2015, and in the aftermath pursued a restorative justice meeting in which she could speak with her attacker about the incident and the effect it had on her. It was so rewarding to hear from Ailbhe about how she coped with her experience and acted as herself in the film

I also had the invaluable opportunity to speak with Alan, Ailbhe, producer Tomás Hardiman, and actress Brenda McSweeney after the film. We went to a local pub and talked about the film, about my career plans, and about filmmaking in general. Alan had been expecting me because Dr. Young, the co-ordinator for UCC’s Film and Screen Media program, told him in advance that I’d be attending the screening. This solidified my opinion that the film industry in Ireland friendly and well-connected, so networking is simple and enjoyable. This impression was one of my driving motivators for studying film in Ireland, and I was delighted to see my hopes and high expectations for UCC come to life within my first month. 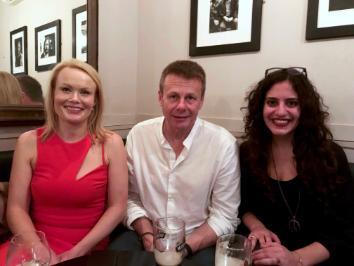 Gabrielle Ulubay is a writer from the United States and is currently studying at UCC for the Masters in Film and Screen Media.  For her undergraduate, she studied history, cinema studies, and international affairs at Northeastern University, and so far has published film reviews, interviews, and an essay for the New York Times. Moving forward, she intends to make films and to continue pursuing writing, and is particularly interested in social justice themes.