The UCC Gamelan Ensemble is a vibrant and energetic group of current undergraduate and postgraduate students at the UCC Department of Music. Directed by Kelly Boyle and Kevin McNally, the ensemble performs a dynamic programme which combines traditional Javanese repertoire and performance practice with new compositions for Gamelan by established Javanese and international composers, as well as a body of innovative work composed and developed by the ensemble members themselves.

The instruments of the ensemble, Nyai Sekar Madu Sari, came to Ireland in 1994, having been specially commissioned by UCC from leading gongsmith, Pak Tentrem Sarwanto. The ensemble is made up of over 60 bronze instruments, including hanging and horizontal gongs and metallophones, and was the first full Gamelan set in Ireland (with both slendro and pelog tuning systems) at the time. In the intervening twenty years, this ensemble has been a driving force not only in defining the UCC music curriculum but also in establishing and promoting Gamelan music education, performance and composition throughout Ireland. In keeping with the long-established tradition of Gamelan teaching and learning at UCC, the ensemble places a strong emphasis on exploring the Gamelan’s potential for original composition, which allows for a repertoire that is continually growing and developing. 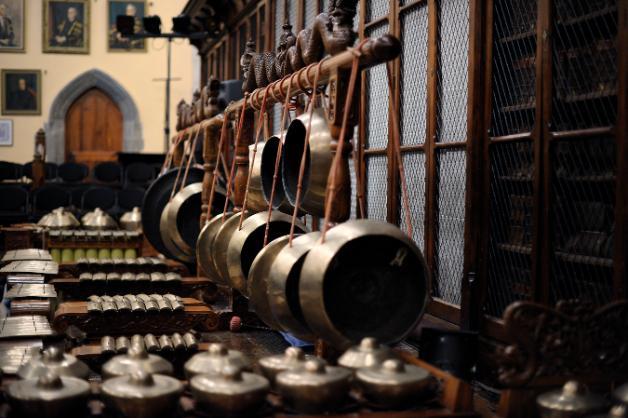