Locating the Storyteller in Sabiha Sumar's Silent Waters: A Tale of Shared Histories and Divided Identities

The Partition of India and the birth of Pakistan in 1947 have remained important issues for debate and investigation for writers, thinkers and historians, in both India and Pakistan, as they continue to deconstruct the traumas, personal losses, and political ramifications of this historic event. Following the Partition, and creation of Pakistan as an independent Muslim state, there has been a surge of investigative literature, creative writing, and cultural media to re-map its impact as it unfolded in the divided Punjab province in particular. Comparatively, cinematic attention to this colossal event has remained nominal.

In her multi award-winning feature film Silent Waters (Khamosh Paani 2003), Pakistani woman filmmaker Sabiha Sumar links the socio-political traumas of the partition of India/creation of Pakistan in 1947, with the advent of military dictator General Zia-ul-Haq’s Islamization period (1977–1988) in Pakistan. Depicting a story based on real-life events that links the transition between two points in the region’s history through events and developments that tragically shatter the peace in a Pakistani village in the province of Punjab, the film focusses on aspects of shared histories and divided identities and the impact of religious fundamentalism and nationalism on women in particular.

This paper examines the significance of Silent Waters as a cinematic auto/biographical-historiography by a Muslim woman filmmaker that addresses multiple transitions and issues of lingering suspicions, memories, traumas, gendered violence, hostilities, political tensions, and issues of personal and political identity, and betrayal in a climate of religious fundamentalism and intolerance that persists decades after the Partition.

Examining Sumar’s film as an example of ‘history on film/film on history’ (Rosentstone 2013), the paper locates the filmmakers’ own tacitly embedded participation in the film as an experiential 'auto/bio-historiographer', arguing for the value of this category within Cinema Studies. 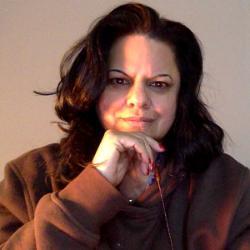 Rahat Imran is currently an MSCA Post-doctoral Research Fellow at the Department of Film and Screen Media, University College Cork, Ireland. She holds a PhD in Cinema Studies from the Simon Fraser University, British Columbia, Canada. Dr Imran completed an earlier 2-year MSCA Post-doctoral Fellowship in Cinema Studies at the University of Bremen, Germany. She has published the first academic book on Pakistani documentary cinema: Activist Documentary Film in Pakistan: The Emergence of a Cinema of Accountability (Routledge, 2016). Presently she is also working on her second monograph, a first academic study focused on women filmmakers from Afghanistan (Routledge). Prior to joining University College Cork as an MSCA Research Fellow, Dr Imran served as Associate Professor in the  School of Creative Arts (SOCA), University of Lahore, Pakistan. Her areas of research, teaching, and publications have included Cinema Studies; Communication Studies; Women’s Studies and Gender Issues; Autobiography; Human Rights; Islamization and Religious Fundamentalism; Women and Gender Issues in Muslim Societies and Cultures; Postcolonial Studies.