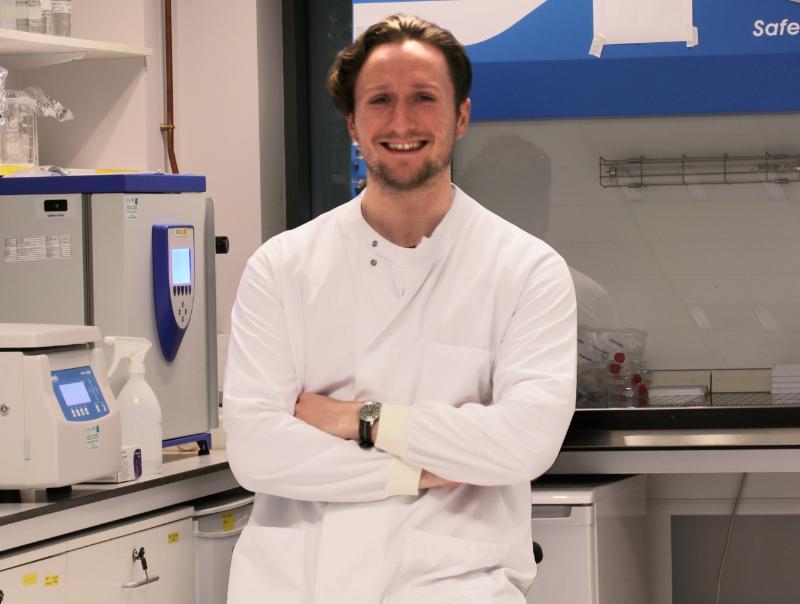 David graduated in the top 5% of the BSc Neuroscience class in 2017. He was awarded a scholarship from the college of Science Engineering and Food Science in in 2016 to conduct a summer project in the Department of Physiology investigating the impact of ghrelin on myenteric neurons in animal models of Irritable Bowel Syndrome (IBS).  During his time in the degree he developed a keen interest in developmental neurobiology and Parkinson’s Disease (PD), which stemmed from his third-year library project and final year research project under the supervision of Professor Aideen Sullivan and Dr Shane Hegarty.

From the data he collected for his third-year library project David co – authored a peer reviewed paper titled “The effects of intracerebral neurotrophic factor application in motor symptoms in Parkinson’s disease: A systematic review and meta-analysis”. David acted as the Class Representative for the Neuroscience BSc Class for 2016 - 2017, he was involved in discussions of several issues that arose in the Neuroscience department, which included making recommendations on how to improve the course content.

David was chosen as the sole student representative on a University-level Programme Approval Panel for a new multi-departmental degree programme in Medical and Health Sciences which commenced in 2018, showing the confidence of the University’s academic staff in his commitment to the interests of students and to provide input to the design of this new flagship programme in UCC.

David is very passionate about science communication and outreach and has been involved in programmes such as Cork Science Week and Science Week Ireland, engaging in scientific activities and demonstrations with the public. David was the Neuroscience student representative for 2016 & 2017 to speak at the annual biological sciences first and second year degree outlet talks where he spoke to students in detail about the Neuroscience course structure, modules undertaken, career opportunities and areas of research they could pursue.

David was awarded a competitive PhD scholarship at the Department of Anatomy, Trinity College Dublin (TCD), under the supervision of Dr Denis Barry, a previous graduate from the Neuroscience degree in UCC. He is investigating the effect of the ketogenic diet on nervous system development.

Comments on the Neuroscience Degree

“From 5th year of secondary school, I knew I wanted to study Neuroscience, moving from Dublin to Cork to study it was a defining moment in my life and one of the best decisions I’ve ever made. The willingness of the staff of the department to help the students achieve their goals and the enthusiasm, encouragement and engagement they showed is unparalleled, with special thanks to Aideen, Shane and Yvonne. The degree allows the student to explore all aspects of neuroscience research, providing modules from developmental neurobiology to neurodegenerative diseases and behavioural and cognitive neuroscience to neuropharmacology. Other modules allow the student to critically analyse neuroscience research articles and gives the students an in – depth knowledge of the latest and most cutting-edge neuroscience techniques available. Furthermore, the library and laboratory research projects not only allow students to hone in on their writing abilities but allow them to further develop and improve their laboratory techniques which will prepare them for working in industry or research. Overall, in tandem with a supportive department and excellent course content, I would highly recommend the Neuroscience degree to anyone who has a desire to understand how the central and peripheral nervous system works in detail. For me, it has lived up to my expectations and more and from the people who I met throughout the degree in conjunction with what I have learned have shaped and moulded me into who I am today.”