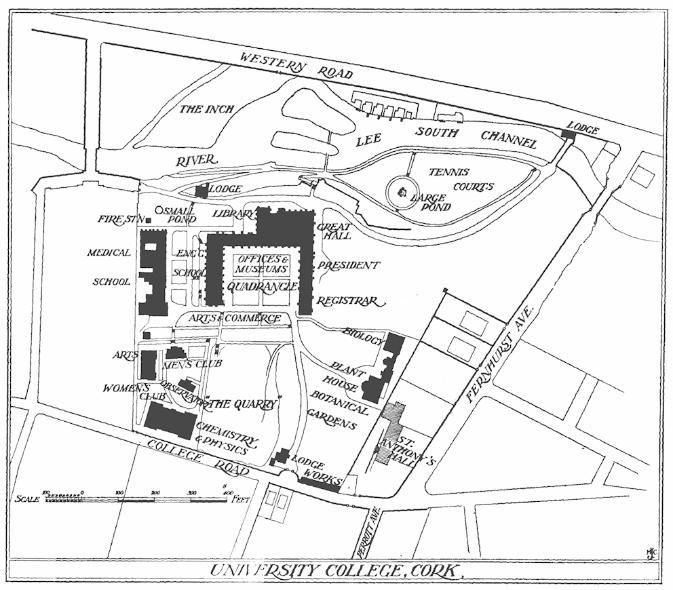 Map of UCC in 1912. Note the location of the gatehouse on the Western Road side of the river.

In 1910 it was found that the bridge of painted Oregon pine that spanned the River Lee at the Western Road entrance was beyond repair and would need replacement. Apparently the estimate for painting and maintenance was £17 annually. The Governing Body invited four steel firms to submit designs and estimates for steel bridges. James Hardress de Warenne Waller, a postgraduate Engineering student, was allowed to submit a design for a reinforced concrete bridge. The reinforced concrete design was cheaper than two other steel designs excluding cartage etc coming in at £235 12s, and so this was chosen by the College. The complete cost was £401 6s including design fees. Fortunately, Waller wrote an article about this new bridge that explains its construction in considerable detail.[1]

Waller was born in Tasmania to Irish parents on 31 July 1884. had graduated BE (UCG, 1909) and then continued his studies under Professor Conal W. O’D. L. Alexander at UCC, graduating ME (1912). After his design of the ferro-concrete bridge at UCC and a new bridge over the River Slaney at Waterford (1911-13), he went into partnership with Alfred D. Delap, as Delap & Waller. Waller was an energetic and innovate engineer. He developed the ‘Nofrango’ (‘no break’) system of lightweight concrete construction used by Dublin Corporation in a row of houses at Rialto in 1928. This system used fabric formwork.[2] He patented the ‘Ctesiphon’ system, which allowed for low-cost utilitarian structures. Buildings in Ireland constructed by this method include Locke's bonded warehouse at Kilbeggan, Co. Westmeath. and farm buildings at Grange, near Trim, Co. Meath. He sold this patent to the Seagram Company of Canada in exchange for an annual pension. Waller died in England on 9 February 1968.[3] 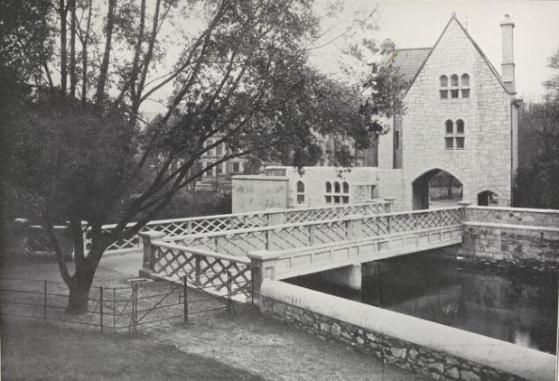 The new bridge designed by Waller. Notice also the exit through the gatehouse out on to Western Road Source: Transactions ICEI, vol. 37, Plate 10.

The new ferro-concrete bridge over the River Lee in the grounds of UCC had a span of 72 feet, 68 feet between abutments. There was a pier in the centre of the span. Waller explains the reasons why an arch was not used including re-using the abutments of the old bridge. The central supports of the old bridge were cast-iron pillars and were incorporated into the new central pier. He details the technical nature of his choice of stirrup, concrete mixture and how the work proceeded in his TICEI article. The surface of the roadway was Staffordshire blue paving brick resting on a filling of breeze concrete. The balustrade was the main ornamental feature and a diamond-shaped lattice panel was used. In the centre of the panel, the  College arms modelled in clay by J. J. O'Brien of the Cork School of Art, was reproduced in cement. The contractor was Antony Gaul of Old Blackrock Road, Cork.

Waller wrote that he believed that the life of reinforced concrete bridges ‘should at least be as long as a stone arch’, with careful construction. Unfortunately, this was not to be the case as only six years later the bridge collapsed. The pier of the bridge appears to been swept away as the middle of the bridge is sunken in photographs. Perhaps insufficient allowance had been made for the tidal river in terms of clearance. 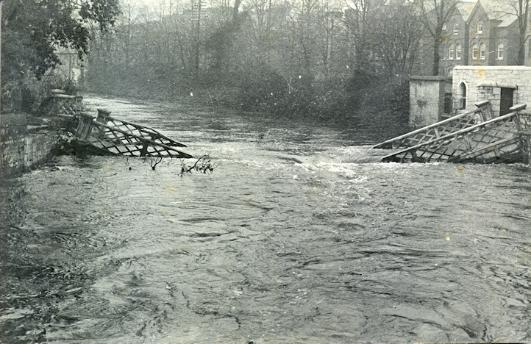 There were extensive storms and floods in Kerry, Tipperary, Waterford and Cork on 17/18 November 1916. The Cork Examiner (20 November 1916, p.6) featured photographs of the flood damage in Cork city, including the Waller bridge. Now there was no bridge between UCC and the Western Road leading to the city. It was to take a decade to replace the Waller bridge with a new one – the Alumni bridge.

[3] For more information about Waller and his other works, see the Dictionary of Irish Architects (accessed 9/11/2020).