With the destruction of the concrete Waller bridge in 1916, there was a gap in time before the next bridge was built. This was probably owing first to the First World War and accompanying depression as well as a difficulty in getting building materials. One of UCC’s most dynamic Presidents, Sir Bertram Windle, resigned in 1919. In this and the following years there was much disruption of civil society. The Irish Free State was founded in 1922 and the new country had to face a budgetary reality in which State funding was much reduced. However, funding for the Dairy Science building and creamery (on Donovan's Road) was provided under section 8 of University Education (Agriculture and Dairy Science) Act, 1926, to not exceed £67,000. The foundation stone of this complex, designed by Cork architect Henry H. Hill, was laid by William T. Cosgrave, Uachtarán, Saorstát Éireann, on 20 July 1928.

Tenders for the construction of a new entrance from Fernhurst Avenue (now Donovan’s Road), to replace the old entrance onto Western Road, were sought in 1917 by the Building Committee of UCC.[1] The plans were available for viewing by contractors at the offices of James F. McMullen, CE, MRIAI, South Mall. However, it was not until the late 1920s that work on the new entrance was begun. It was a decade before tenders were invited in 1927 from contractors for the erection of a new ferro-concrete bridge over river Lee and cut-stone piers with wrought-iron entrance gates.[2]

A sketch of the proposed new entrance as supplied by O’Flynn & O’Connor was printed in the Cork Examiner shortly after the closing date for tenders by contractors.[3] 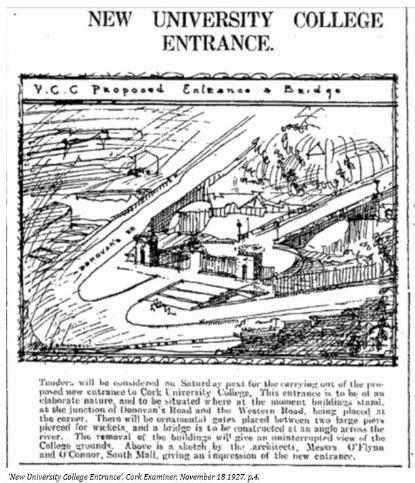 The engineer for the project was Bartholomew O’Flynn, BE, BA, AMSanInst, MRIAI. O’Flynn graduated BA (UCC 1895) and BE (UCC 1896). Between 1919 and November 1927, O’Flynn was in partnership with Dominic M. O’Connor, as O’Flynn and O’Connor at Trinity Chambers, 60 South Mall, Cork.[4] The contractors appointed for the bridge were Murphy Brothers, Dublin and Cork.

Work was underway in September 1929 as can be seen from an advertisement with photograph for 'Ferrocrete' printed in the Cork Examiner.[5] The new bridge had an arch span of 60 feet. New piling had to be done for the abutments, which caused consternation as it was difficult to find the solid rock as noted in an article about a possible second river beneath the Lee.[6] President Merriman, addressing the Staff Scientific Society, in 1928 stated that the piling had gone to '45 feet or more'. He said that he went into this explanation as there had been criticism about the delay (Cork Examiner, 11 October 1928, p.14).

Preparatory work began in 1928: see photo of the site on the northern bank.[7] The entrance gate and bridge that leads to the University from the Western Road were completed in October 1929. The first two bridges had been sited a few yards upstream of the present bridge, with a gatehouse on the north bank of the river, that is, on the Western Road bank. The gatehouse was demolished and the present East Lodge was constructed reusing the stone but relocated to the southern riverbank. The ornamental gates from the gatehouse were re-used at the Gaol Walk entrance where they replaced the old wooden ones. From the Western Road, the present entrance is through the site of Breen’s shop and outbuildings that were demolished to make way for it.

In October 2018 this bridge was renamed the Alumni Bridge. The naming symbolises the University's commitment to building lifelong relationships with its graduates.

“There will be ornamental gates placed between two large piers pierced for wickets, and a bridge is to be constructed at an angle across the river. The removal of the buildings will give an uninterrupted view of the College grounds.” The bridge and new entrance were one construction project. A 1929 article from the Cork Examiner describes the new entrance as it appeared shortly before completion:[8]

The elaborate new entrance being made to the University College, Cork, from the junction of the Western Road and Fernhurst Avenue is now nearing completion. On Saturday morning hoardings had been completely removed and passing citizens were able to glean an excellent idea of what the finished entrance will look like.
It will be a very imposing affair undoubtedly, and in the future must be one of the principal landmarks of the city. There are two cut-stone piers of solid yet graceful design, on either side of the main gate. The latter is a massive piece of ornamental ironwork, with railing to correspond, extending some distance to either end. The piers are pierced and enclose gates for pedestrians, similar in design to the larger gates.
At present workmen are busily engaged preparing the passage ways from the roadway and the pathways on the Western Road and the Fernhurst Avenue sides to the gates. Meanwhile painters are adorning the ironwork both of the entrance itself and the new bridge recently completed to carry the avenue.
There was an entrance to the University College from the Western Road in former times, but the bridge spanning the arm of the Lee here got washed away, and for some years the entrance has been from College Road.
The new work is entirely of Irish materials, everything possible being procured locally, the gates being by Messrs McLaughlin, Dublin, and the railings by Messrs John Buckley and Sons, Cork. It is expected that the work will have reached completion in three or four weeks from now.

It is likely that for ‘Messrs McLaughlin, Dublin,’ the firm of J. & C. McGloughlin, Ltd, 48 Great Brunswick Street, Dublin, was meant. The railings were made by ironfounders and art metal workers, John Buckley & Sons,  7 Half-Moon Street, Cork. 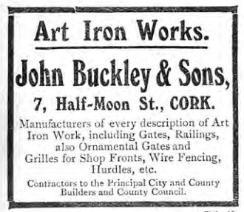 A photo of the almost complete entrance appeared in the Cork Examiner in October 1929.[9]

There was some concern about the motto appearing only in English, [10] but this may have been temporary as now along the top of the railings the name of the university is in Irish (left side) and English (right side), with the arms and motto in Irish in the centre over the double gates. 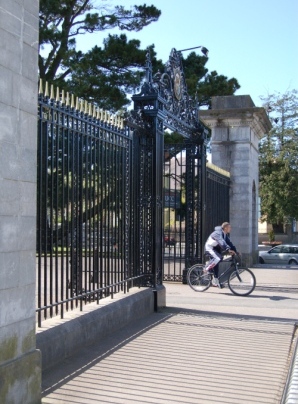