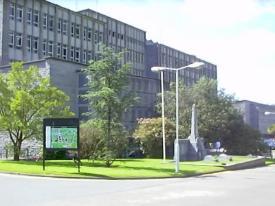 The site of the old Cork County Gaol was transferred to UCC in two portions, in 1946 and 1957. In February 1964, during the presidency of Dr J. J. McHenry, it was announced by Jack Lynch TD, Minister for Industry and Commerce, that the Government had sanctioned the construction of a new physics and chemistry building at UCC at an estimated cost of £900,000.[1] The plans had been sent into the Department for Education about two years previously. At this stage there were 1,945 day students and about 500 night students at UCC.

Journey to a building

An architectural scale model (now in the UCC Collections) of the Science (now Kane) Building was constructed on a scale of 1/8in to 1 foot. The inscription records that the architect was James R. Boyd Barrett ARIBA FRIAI Arch. Gormol Displays of Cork made the model. In 1966, RTÉ’s Newsbeat programme, with local journalist Bill O’Herlihy, is about UCC and shows the model in the window of the President's Office in December 1966 (at 2:51 mins).

Tenders for construction of the ‘Proposed Science Building’ were sought in April 1966.[2] The building had already been designed by Cork-based architect, James R. Boyd Barrett (1903-1976), KCSS, ARIBA, FRIAI, Chartered Architect. Boyd Barrett had previously designed the Main Restaurant building in the late 1940s (NIAH Reg. No. 20866141) and the Electrical Engineering Building in 1952 on the UCC main campus.

The quantity surveyors were P. F. Coveney and Son, South Mall, Cork. The estimated cost of the new Science Block at UCC was £1.35m in 1966. However, the lowest tender received (from J. and G. Murphy (Cork) Ltd) was for £1.503m. This difference between the two figures resulted in a delay until the Government sanctioned the funding on 29 January 1967, which was announced by Donogh O’Malley TD, Minister for Education, at the annual dinner of the Cumann Mic Léinn Leighis na hÉireann.[3] The Minister stated that the Department had already given a capital grant for the site clearance, which was already under way. The figure rose again in February 1967 to £1,578,925 owing to higher tenders for mechanical and electrical services than previously estimated.[4]

The role of Clerk of Works was advertised in February 1967, the salary ranged from £30 to £40 per week depending on experience and qualifications.[5] Experience in reinforced concrete construction was required. A Services’ Clerk of Works was advertised for later that same month, who would supervise the mechanical and electrical installations. This salary for this job was advertising as being between £25 to £30 per week. Masons were ‘wanted immediately’ in May 1968.[6] In October 1968, steel fixers were sought to work on the ‘New Science Building’.[7]

It took until October 1967 before the Government gave permission to UCC to proceed with the new figure of £1.578m. Donogh O’Malley TD, Minister for Education, made the announcement at a presentation of prizes following inaugural Irish Medical Schools’ rugby seven-a-side competition at the Mardyke, Cork (for which he donated a trophy).[8] Uinseann Ó Murchadha, President of the Student Council, UCC, commented following the announcement that it had been worth the students protesting at Limerick (the constituency of the Minister) and he was grateful that the building would go ahead.[9] Dr J. J. McHenry, President, said that construction would begin almost immediately. The successful tender was submitted by the local firm of J. & G. Murphy (Cork) Ltd. Other contractors were quantity surveyors: Patrick F. Coveney & Son; structural engineers: O’Connell & Harley; mechanical and electrical consultants: Varming Mulcahy, Reilly Associates.[10] 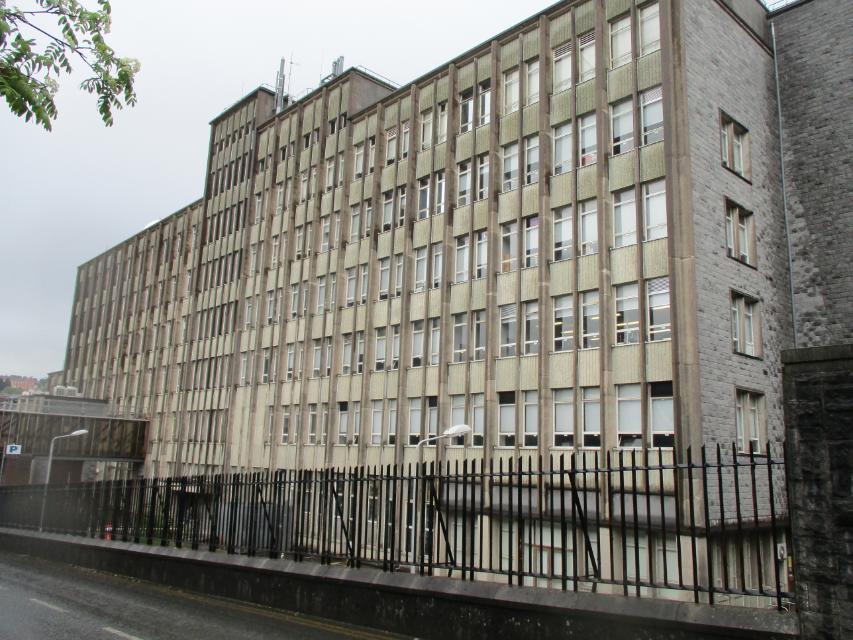 Many photographs of the construction work appeared in the local press as much employment was provided and it was such a large project.[11] From the presentation model of the building (created in about 1966) and as late as February 1968, it appears that a car park under the southern end of the building had been originally planned.[12] Although the old Cork County Gaol was demolished, the portico facing towards Western Road was retained (NIAH Reg. No. 20866134).

Progress was far from smooth. In 1968 a claim was made by a labourer for negligence for £600 against J. & G. Murphy (Cork) Ltd, Monahan Road, contractors for the project.[13] It was claimed that a bucket of cement suspended from a crane had crushed the labourer against steel reinforcing bars in October 1967, however, the case failed when evidence was presented. A sad loss occurred in 1968 when Dr Noel Mulcahy, lecturer in Chemistry at UCC, who was travelling to London in connection with researching equipment for the new laboratories, lost his life along with all others on the Aer Lingus Flight 712 from Cork to London.[14] He had graduated from UCC with a BSc in 1950 and MSc in 1952. He was survived by his wife, Dr Máire Mulcahy (Zoology) who was a daughter of Dr J. J. McHenry, and later became UCC's first female Deputy President.

The College had originally hoped to get the building by September 1969, which had been specified as the completed date in the contract, but even by November 1970 only the four lecture theatres were accessible.[15] Dr M. D. McCarthy, President of UCC, expressed dissatisfaction with the poor planning of the project; he said, that he had been ‘left with the distinct feeling that much time could have been saved by more adequate planning and control, including insistence on the meeting of intermediate deadlines for various activities’. There had been an increase of 10% in the number of students meaning almost 4,000 were in College that session and further delays would, he feared, mean restrictions on the numbers entering UCC.

A blow was struck in early 1971 when the possibility of the building contractors, J. & G. Murphy, going into liquidation was front-page news.[16] The article explained that there would be a meeting of creditors in Cork city and a liquidator might then be appointed. The firm had been established in 1958 and had built many large projects in the country, including Limerick Regional Hospital, Ardkeen Hospital in Waterford, and the Coombe Hospital and Basin Lane School, both in Dublin. As feared, the company did go into voluntary liquidation leaving 100 employees out of work.[17] The liquidator, John J. Hyland, met with the authorities at UCC to discuss completion of the contract. Fortunately, almost all of the work in the Science Building had been completed and paid for.

Although the project was not entirely finished, the building began to be occupied from the beginning of the academic year 1970/71, with access to four lecture theatres in Autumn 1970[18] and the building was not finally completed until 1971.[19] The 10th Irish Conference of Historians used Room G20 in May 1971.[20] Plans for the building had begun in the presidency of Dr J. J. McHenry and it was constructed during the presidency of Dr Michael Donal McCarthy, who created the Development Plan Report in 1972. There was apparently no official opening ceremony for the new Science Building – no doubt patience about completion had grown thin.[21] The building was named the Kane Building in 1997 after Sir Robert Kane FRS, the first President of Queen’s College, Cork. 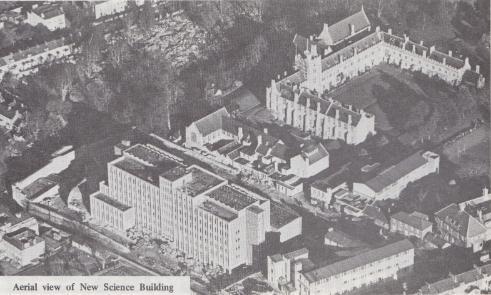 Architectural drawings, etc., UCC buildings, these may be held by Buildings & Estates and/or the University Archivist archives@ucc.ie; or https://www.ucc.ie/en/ocla/archives-and-records/archives/