John Joseph McHenry was born in Dublin city on 9 June 1897, the son of Jeremiah McHenry (book binder) and his wife Frances White. He attended University College Dublin where he studied Experimental Physics and was awarded a first-class honours BSc (1917) and an MSc. McHenry won an NUI  Travelling Studentship in 1918, with which he undertook studies at the Cavendish Laboratory, University of Cambridge (MA, Cantab). He was a member of Downing College, Cambridge. When McHenry completed his studentship, he returned to University College, Dublin where he taught Physics and continued with his research under the head of department, the distinguished Prof. John A. McClelland FRS. McHenry then moved to the Physics Department of University College, Galway. While at Galway he published several papers on Positive Rays and on Contract Electromotive Forces.[1] In 1931 he was awarded a DSc by the National University of Ireland.

In 1932, when the Chair of Experimental Physics became vacant with the retirement of Prof. William Bergin at UCC, McHenry secured the post. Here he continued his research projects and with his students made a number of contributions to the study of Ionization in Gases, X-Ray Analyses of Materials, and to the study of Radioactivity in Atmospheric Fall-out. He also produced an important paper on an experiment in Geometrical Optics and published a complete theory of the Lindemann Electrometer. He was a Member of the Royal Irish Academy (MRIA) and a fellow of the Institute of Physics (FInstP). John McHenry was recognized as an able and efficient administrator and was regularly elected to the UCC Governing Body and the Senate of the National University of Ireland. He was also a member of the Atomic Energy Commission (Ireland) and the Commission for Higher Education (Ireland).

Appointed President of UCC on 9 January 1964, an investiture procedure as laid down at the time of the installation of his predecessor was held on 1 February 1964.[2] In his speech, he noted that there were 2,460 students at UCC and that at the current rate of increase of numbers, the pressure on space would continue. A major project in the planning was the new Science building to be constructed on the site of the former gaol, as well as a third storey to the Electrical Engineering Building. As President of University College Cork McHenry ably presided over the institution at a time of limited funding and resources. His abilities in leading the University in this environment were testimony to his strategic and administrative skills. McHenry was the first President to appear on Irish national television, being interviewed on camera by Cork native Bill O’Herlihy in 1966 for the hard-hitting ‘Newsbeat’ programme. McHenry was Vice-Chancellor, NUI, from 30 September 1964 until 31 December  1966. He retired, aged 70, from the Presidency on 9 June 1967.[3] The portrait of John J. McHenry is on display in the Aula Maxima, UCC.[4]

John J. McHenry was married to Nan Rice of Armagh in January 1923. She died in the President’s House, UCC, on 5 May 1967. John McHenry died on 3 September 1976 and he is buried alongside his wife at St Finbarr’s cemetery, Cork. Obituaries were published in Irish local and national newspapers.[5] 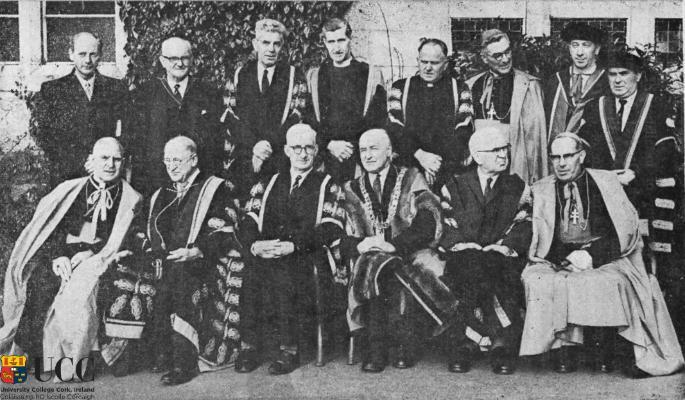 Group photograph taken after the installation of Dr J. J. McHenry as President of UCC

Select bibliography of the works of John J. McHenry

‘L. On the variations with temperature of contact electromotive forces’ London, Edinburgh, and Dublin Philosophical Magazine & Journal of Science Series 7, 8: 51 (1929), 474-491

‘The effective capacity of the Lindemann electrometer’, Journal of Scientific Instruments 10: 10 (1933), 305