Sculptor: Patrick John Scannell (1819-1911), Irish. Scannell was baptised on 10 April 1819 in the South Parish of Cork city. Following his death on St Stephen’s Day 1911, aged 92, a photograph of Patrick, with members of the family was published in the Cork Examiner (29/12/1911, p.8). An article in the Southern Reporter identifies Scannell as the sculptor of this statue. The Dictionary of Irish Architects records that Scannell worked at the Cork Marble Works on Douglas Street. Other works executed by Scannell in Cork are the Berwick fountain, Grand Parade (1860), the marble altar in the Church of the Resurrection, Blarney (1861), the high cross on the grave of John Windele, St Joseph’s cemetery, Cork (1867), and the altar rails in the Cathedral of St Colman, Cobh (1891).

Provenance: Commissioned by Sir Thomas Deane, the Cork architect, who presented it to Queen's College, Cork, as a personal gift to the new institution in 1849. 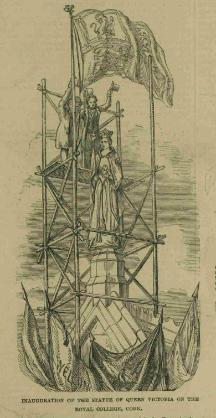 This statue was placed on the pinnacle of the eastern gable of the Aula Maxima in August 1849 on the occasion of Queen Victoria's visit to Ireland. The queen and her consort, Prince Albert, landed at Cobh and travelled through Cork city, passing along the Western Road from where she saw the statue being unveiled. Queen's College, Cork, founded under statute in 1845 along with the Colleges in Belfast and Galway, opened its doors to students in the autumn of 1849. The unveiling of the statue at the moment when the Queen passed by is described, along with an engraving, in the Illustrated London News (11/8/1849, p.85, left). A full account of the visit is available in the Cork Examiner (3/8/1849, pp2-3), from which the following description of the moment when the statue was unveiled is taken:

"As the cortege passed along the Western-road the towers the Royal College appeared in sight; and her Majesty's attention was directed to the institution that is to bear her name. At the moment the carriages passed the college the sustaining wedges were withdrawn, and, amidst the discharge of cannon, a statue of her Majesty, presented to the college authorities by Sir Thomas Deane, was suddenly erected on the apex of the most conspicuous gable. By the removal of the wedges large obstacles that interfered with distinct view of this structure, were, to a certain extent, removed, and the Royal standard was seen waving in the air; and under it the expressive banners of the various trades employed in its erection. The sight of this interesting spectacle induced her Majesty to stop the progress of the carriages for a moment, during which time she appeared highly pleased at this gratifying commemoration of her first visit."

In 1934 the statue was moved from its original position and installed in an office in the East Wing. Weighing 0.75 tons, it had to be removed as it was too heavy for the floor to bear and it was then buried in the College grounds in 1946. In late 1994 it was excavated, cleaned and displayed in the old council room during the 150 Universitas exhibition held in 1995, which celebrated 150 years of UCC. It has remained on display in the new UCC Alumni Association Room (former council room), except during the visit of HRH Queen Elizabeth II of England to Cork in 2011 when it was moved temporarily to the Tyndall National Institute, Dyke Parade, where it was viewed before returning to its present location. The statue was viewed in the Alumni Association Room by HRH Prince Charles, Prince of Wales, on 14 June 2018.

As explained by John A. Murphy, Emeritus Professor of History at UCC:

"The erection of the statue in 1849, its deposition in 1934, and its rehabilitation in 1995 – these successive events mirror the changing state of the British-Irish relationship over that long period: first, British dominance, then nationalist triumphalism, and finally reconciliation. Today, the Victoria statue represents the mutual respect of friendly neighbours on an equal footing." (from press release issued in 2011).

Previous Article Next Article
Back to Collections