Provenance: Commissioned by Dunlop Tyres in 1959 and originally placed in the Dunlop premises in Cork. Donated to UCC in 1985 by Dunlop Tyres following closure of the factory in 1983. Conserved and placed on display on 20 November 2007. Official ceremony 20 December 2007 (reverse of invitation card shows Séamus Murphy at work on this sculpture). 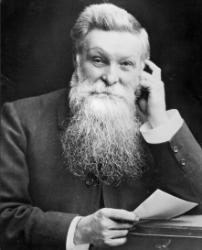 John Boyd Dunlop (born Dreghorn, North Ayrshire, Scotland 5 February 1840 – died Dublin, Ireland 23 October 1921) was a veterinary surgeon. He trained at the Clyde Street Veterinary College (also known as the Dick Vet after its founder William Dick), now the Royal (Dick) School of Veterinary Studies, University of Edinburgh) and set up his own practice, moving to Downpatrick in Northern Ireland in 1867 where he practiced with his brother James. The business later moved to Belfast in the 1880s. In 1871 he married Margaret Stevenson (1840-1929) of Ballymena, Co. Antrim, and they had two children, a daughter Jane (Jeannie) Willis Dunlop (1880-1956) and son, John Boyd Dunlop (1877-1920), both of whom had descendants.

In 1887 Dunlop began developing what was to become the first practical pneumatic tyre for his son’s tricycle. On 7 December 1888 he was granted a patent. However, unknown to Dunlop, Robert William Thomson, another Scot, had already patented a pneumatic (inflatable) tyre in France in 1846 and the USA in 1847. Following discovery of this in 1890 and in order to capitalize on the product William Harvey Du Cros, president of the Irish Cyclists’ Association, and Dunlop who had already set up a company together, now created a company called the Pneumatic Tyre and Booth’s Cycle Agency in Dublin. Dunlop retired in 1895 and in the following year Du Cros sold the business to financier Terah Hooley. Du Cros remained in the business but Dunlop had no further connection with it having made very little financially from the product. His name and image, however, are still used by descendant companies today (for example, in an advertisement, Cork Examiner, 10 August 1934, p8, there's a logo displaying Dunlop's head). His own account of The history of the pneumatic tyre was published in 1924.

Dunlop lived at Simmonscourt, Donnybrook Parish, Dublin, with his family. In the 1901 Census his occupation is retired veterinary surgeon and by 1911 his occupation (and that of his son) was company director.

The Dunlop Company in Cork

In 1890 Dunlop opened its first tyre plant at Upper Stephen Street, Dublin, Ireland, followed by others around the world. In 1898 production in Dublin was transferred to Coventry and then to Birmingham in 1902. Plants were established worldwide making the Dunlop Company an early multinational corporation.

The Dunlop Rubber Company (Ireland) Ltd was incorporated in 1924 at Dublin. A distribution depot, Dunlop House, of 9,000 sq ft, was opened in Cork in 1927 [Cork Examiner, 16/11/1927, article and photo, p8]. This building was built by Delaneys of Henry Street, electric fittings by Porte & Co., Marlboro Street, heating and sanitary plumbing by McCarthy & Sons, with furniture and fittings by the Munster Arcade. The building, with extensions, still survives on the Lower Glanmire Road, near Kent Station. In 1934 , a site was chosen for a factory on Centre Park Road, Cork [Cork Examiner, 03/09/1934, p4], and groundworks began in October [Cork Examiner, 16/10/1934, p9; 26/10/1934, p9]. The architect of the factory was Mr Willshaw, the contractors were John Sisk & Son, Cork. The Irish Dunlop Company Ltd commenced manufacturing at a new factory in April 1935 [‘Taking the first tyre from the mould’, photo, Cork Examiner, 03/04/1935, p3], with a civic visitation in September of that year [‘Progress of new Cork factory’, Cork Examiner, 13/09/1935, p12]. The site was leased from Fords but later purchased in 1947 following the issue of £120,000 3½% first mortgage debenture stock [‘New capital issues: Irish Dunlop Company’, Irish Independent, 17/04/1947, p7]. This was the outcome from a deal pushed through by Seán Lemass TD, Minister for Industry, whereby Dunlops were licensed to hold an 80 per cent share of tyre production in the country (thus effectively removing  competition) [see, for example, Seanad Éireann debate, 6 September 1934]. In 1941 the Irish Dunlop Company Ltd had been appointed official agents for the salvage of rubber; disposal elsewhere was made illegal [Irish Press, 21/11/1941, p2].

The factory at Cork produced tyres, golf and tennis balls, footwear and other rubberised goods (including ‘rubber dollies’ as they were known in Cork, aka canvas shoes with rubber soles). The output exceeded local demand and so an export business was created. In 1965 the Dunlop head office was moved from Dublin to the Marina site in Cork thus merging management and production on a single site, with a new sales headquarters erected in Dublin [aerial view of the factory in 1955 and 1956, both National Library of Ireland]. The Dunlop factory at Cork closed on 30 September 1983 with the loss of 680 jobs [coverage, Cork Examiner, 01/10/1983, pp12-13]. In 1985 it was revealed that the Dunlop corporation was suffering estimated losses of £88m [Cork Examiner, 14/03/1985, p6].

Séamus Murphy was born on 15 July 1907 at Greenhill, Burnfort, near Mallow, Co. Cork, but moved with his family to Cork city when he was very young. He received his early education in Cork. He then became an apprentice stone-carver at John A. O’Connell’s Art Marble Works, Watercourse Road, Blackpool, where he specialised in architectural and foliage carving. He was also attending the Crawford School of Art in Cork city centre at this time. In 1931 he was awarded the Gibson Bequest Scholarship and exhibited at the Royal Hibernian Academy exhibition. In 1932-33, he studied in Paris at the Académie Colarossi and at the Académie de la Grande Chaumière. He returned home in 1934 and opened his studio at the Watercourse Road. Murphy was elected associate of the Royal Hibernian Academy in 1944 and a decade later became a full member. In 1964 he was appointed RHA Professor of Sculpture and became a member of the Arts Council of Ireland in 1973. The National University of Ireland conferred him with an honorary LLD in 1969.

His exhibitions included: Salon de Printemps, Société des Artistes, 1933; a group exhibition at UCC in 1935; World Fair, New York, 1939; solo exhibition in Cork Public Library, 1956; joint exhibition with artist William Harrington, 1967; Adare, Co. Limerick, 1973; exhibited at ROSC ’75, Cork; as well as at the Royal Hibernian Academy. A retrospective exhibition was held in 1982 at the Crawford Municipal Gallery of Art, Cork, and at the Douglas Hyde Gallery, TCD. His memoir Stone Mad, first published in 1950, remains in print, and in 2013 was chosen as Cork’s Favourite Book.

Séamus Murphy married Maighread Higgins (daughter of sculptor Joseph Higgins (1885-1925) and Katherine Turnbull), with whom he had two daughters and one son. He died in Cork on 2 October 1975 and is buried in Rathcooney cemetery, north of Cork city.

Cork City & County Archives, PR6/728, Invitation card from the directors of Dunlops to celebrate the opening of the new factory at a dinner, 29/07/1935

Previous Article Next Article
Back to Collections