UCC has made significant new commitments to advance gender and related equalities, for which it has been recognised with its second consecutive Athena SWAN Bronze award. UCC signed up to the Athena SWAN Charter for advancing gender equality in 2015, and devised a series of award-winning actions to begin to address equality across the institution. These included more comprehensive recognition of statutory leave in academic promotions schemes, and greater measures to support working parents. This second Bronze award aims to build on our progress, through a range of initiatives to 2023 which include: the roll-out of guaranteed lecturer (below the bar) contracts to cover academic staff taking maternity leave; strong oversight of hourly paid employment in the University; expanding our flexible working policies and guidance to better support staff to work in the ways they need; more explicit efforts to recruit diverse staff, and; the identification and establishment of measures to advance race equality across the University. As part of national efforts to diversify its professoriate, UCC is also currently recruiting a Professor of Irish Gender History and a Professor of Microbiome and Health Science. This recruitment process is part of the Higher Education Authority’s (HEA) Senior Academic Leadership Initiative.

To earn an Athena SWAN award, an institutional or departmental applicant must conduct a robust self-assessment of gender and related equality issues, considering demographic as well as qualitative data to identify areas of strength and opportunities to improve.  Chair of UCC’s Athena SWAN Steering Group, Deputy President and Registrar Professor John O’Halloran stated:

“I am delighted that UCC has achieved its second Athena SWAN Bronze award in recognition of the significant work and commitments we have made to advance gender and associated equalities in the University. Building on existing work, for more than a year, over 60 colleagues took part in a large-scale self-assessment of equality issues in our institution supported by our Equality, Diversity and Inclusion Unit. We have devised an action plan which is ambitious, but which we are committed to delivering on. I want to thank everyone who has worked on Athena SWAN and wider equality issues in UCC in large or small ways to date, and look forward to us working together to continue to advance equality for our staff and students. The University will continue to use the opportunity that the Athena SWAN Charter affords to be as inclusive and forward-thinking as we can about a range of equality issues”.

Academic units can also apply for Athena SWAN Bronze awards using a similar process of self-assessment and action planning. The School of Public Health was also recognised for its commitment to advancing gender equality by being awarded a departmental Athena SWAN Bronze award. This brings the total number of departmental awards in UCC to six. Chair of the School of Public Health’s Athena SWAN Self-Assessment Team, Professor Patricia Kearney stated:

“Public Health has worked particularly hard on understanding a range of gender equality issues for staff and students over the past two years. Like other Schools in the University, we have now put a plan in place to address the underrepresentation of females in senior academic positions, to support career progression for all, and to tackle the gender stereotyping of our discipline in the way we reach out and promote our programmes. While we were always committed to these issues, we are even more motivated to implement our action plan. Public Health is leading the way responding to current global challenges such as COVID-19, and we will continue to ensure that the discipline advances the goals of a just and equal society”. 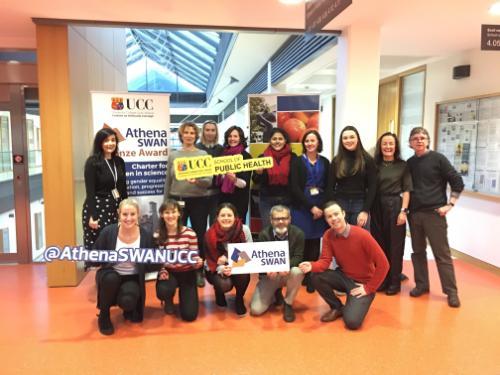 Once institutions such as UCC achieved two consecutive Bronze award, they are expected by the Higher Education Authority (HEA) to show the ‘impact’ of their actions and apply for Silver award status. UCC is committed to progressing towards Silver status through its gender equality actions, and by significantly scaling up the departmental self-assessment process at individual School level between now and 2023.