A Traveller Pride flag-raising on the iconic UCC quad and launch of the Traveller Ally & Proud campaign sticker at the Glucksman Gallery both took place on Wednesday 29 September 2021.

As part of Traveller Pride, UCC hosted two events on Wednesday 29th September to reaffirm its commitment to promoting and celebrating Traveller culture and promoting inclusion on campus.

These events were organised by the Traveller Equality and Justice Project (TEJP) in collaboration with the Equality, Diversity and Inclusion Unit at UCC. The TEJP is an innovative collaborative project between UCC School of Law and the Free Legal Advice Centre (FLAC). Based within the Centre for Criminal Justice & Human Rights at the UCC School of Law, the TEJP aims to highlight ongoing levels of discrimination experienced by Travellers in Cork and improve access to justice.

Speaking about the importance of the event, Breda O’Donoghue of the TVG recognised UCC’s commitment to the Traveller Community in Cork, saying:

Both the Traveller Visibility Group and Cork Traveller Women’s Network welcome this display of allyship and solidarity from UCC during Traveller Pride Week 2021.

President John O’Halloran expressed support for the event, stating that:

The Traveller Ally & Proud campaign grew out of joint discussions between the TEJP and Traveller organisations in Cork. The campaign sticker is awarded to businesses, organisations and groups who are Traveller allies and have created welcoming spaces for Travellers and supported Traveller rights and culture. Those awarded the sticker will display it in their buildings to show their support for Travellers and to indicate that the business or organisation represents a welcoming ‘safe space’ for members of the Traveller Community. The final reveal of the 2021 Traveller Ally & Proud Sticker, designed by Francesca Hutchinson, took place at the Glucksman, 29th September at 1pm. Francesca’s beautiful piece is being displayed alongside ‘beady pockets’ and the Cork Traveller Flag.

Speaking to the importance of platforming Traveller artists, Fiona Kearney, Director of the Glucksman noted that:

The Glucksman is proud to support Traveller Pride through the display of an original artwork by Francesca Hutchinson in the gallery foyer from 29 September – 3 October 2021. Over the last five years, the Glucksman has provided dedicated art projects for the Traveller community with an emphasis on supporting creative expression that celebrates and explores Traveller culture in the context of contemporary art.

About the sticker design

The TEJP issued a call for the ‘Traveller Ally & Proud’ sticker from Traveller creatives in the Summer of 2021. Francesca Hutchinson’s submission was the chosen design as it so beautifully represents the aim and heart of the campaign. 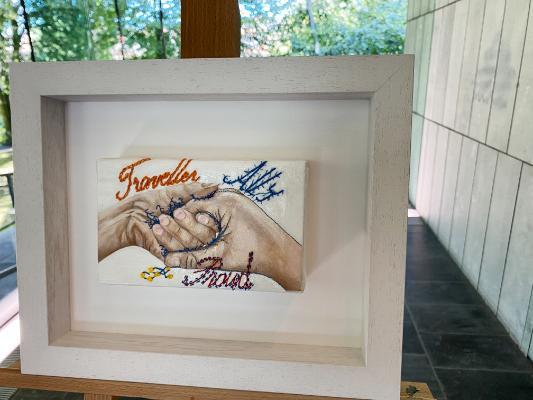 Francesca is an Offaly based multidisciplinary artist and member of the Traveller Community. She is currently studying in Limerick School of Art and Design and will be completing her final year this coming September. Her work continuously evolves through a complexity of mediums and materials; currently she is exploring textiles, embroidery, and industrial materials. She takes inspiration from her family’s heritage coming from the Traveller community, her artwork also deals with issues such as depicting an invisible illness and the cycle of life.

Her Traveller Ally & Proud painting is one of acceptance, courage and solidarity. It is inspired by the Traveller Community’s rich culture and particularly the craft of beady pockets. The painting features decorative chain stitches, feather stitches, French knot stitches, and a running stitch. They symbolise exciting times for the future, the remembrance of loved ones, and safety. On the painting, the feather stitch spreads through both hands, just as the solidarity and strength spreads for Travellers currently and forevermore. This piece symbolises the strength and solidarity Travellers have been and will be given through acceptance by these businesses and organisations.

Speaking about the importance of both events, Dr Fiona Donson, Director of the TEJP, explained that:

By flying the flag UCC is showing that the university is a safe and welcoming place for Travellers. The event is a welcome reminder of the importance of allyship with Cork’s Traveller Community and the need for continued partnership with local groups which can translate into increased Traveller student representation on campus.

About our Traveller Community Organisation Partners

The Cork Traveller Women’s Network is a Traveller-led community development project which works for Traveller rights in Cork. Based in the Triskel the organisation has a range of focuses including increasing Traveller access to the arts and platforming Traveller voices through the arts.