The Rule of Law Crisis and the European Union

The European Union is a community founded on the rule of law. However, recent developments in Hungary and Poland have led to concerns that the rule of law, and democracy in general, is being undermined. A series of judgments of the Court of Justice of the EU have condemned various judicial reforms in Poland, while the European Commission has also launched infringement proceedings on the same issues. Given the nature of the EU as a project of legal integration relying on shared values and mutual trust, these challenges represent profound and possibly existential challenges to the European Union as we understand it. Professor Kochenov, a leading expert and participant in these debates will discuss the background of and recent developments in this crucial area.

See here for a recent publication of Professor Kochenov giving a comprehensive overview of developments in this area.

Security and the Future of Europe

COVID and the Economic and Monetary Union

The ongoing COVID-19 crisis has posed various challenges for the European Union including securing free movement of persons and coordinating health policy and vaccine procurement amongst Member States. In order to deal with the economic consequences of COVID-19, the European Union has also made significant changes to its budgetary policy and disbursed impressive sums of money in the form of loans and grants. It has also introduced common debt instruments for the first time. These mark a significant shift in the European Union’s response compared to the Eurocrisis. Professor Gavin Barrett will address these economic implications and assess their importance for the future of the European Union.

The Law of Brexit

Brexit has been, and continues to be, a legal as well as political shock to the European Union, the United Kingdom and Ireland. Professor Michael Dougan will discuss the law relating to Brexit, including the Article 50 TEU process and the set of agreement regulating the UK’s withdrawal and future relationship with the European Union. Click here for a link to Professor Dougan’s recent monograph on The UK’s Withdrawal from the EU: a Legal Analysis.

Keynote Lecture: Ireland and the Future of Europe - Wednesday 21 April 2021

Dr Stephen Coutts, UCC School of Law and the UCC Brexit and the Future of Europe Project, welcomes Professor Brigid Laffan of the European University Institute in Florence to give the keynote lecture of the 2021 speaker series on "Ireland and the Future of Europe". Professor Laffan is a leading world expert on European integration and politics and has been central to academic and policy debates on the European Union, including Brexit. She is the Director and Professor of the Robert Schuman Centre for Advanced Studies at the European University Institute in Florence and has received numerous awards for her contributions to EU political studies, including the UACES Lifetime Achievement Award, the THESEUS Award and the Ordre national du Mérite by the President of the French Republic.

On 24 March 2021, UCC School of Law welcomed Professor Laurent Pech (Middlesex University) to deliver a lecture on the rule of law crisis currently facing the European Union. There are increasing concerns related to the independence of the judiciary in a number of central and Eastern European Member States and a broader undermining of the rule of law and democratic institutions. The response of the Union has been delayed and piecemeal but now political, legal and budgetary mechanisms are being deployed in response to these developments. In this talk, Professor Pech addresses the current state of play in rule of law developments in the European Union. This event was chaired by Professor Dagmar Schiek from the UCC School of Law.

On 2 December 2020, the BreFoE module welcomed a number of speakers to discuss the constitutional futures of Britain and Ireland in the wake of Brexit. Brexit has brought underlying tensions in the UK's geographic constitution to the fore, with increasing calls for Scottish independence, the prospect of a referendum on a united Ireland and, more immediately, the impact of Brexit on the devolution settlement in the context of the UK Internal Market. You can view this webinar below:

The BreFoe Module was delighted to welcome Dr Adrienne Yong of City University (London) to discuss the question of citizens' rights in the context of Brexit. Unfortunately, a planned public talk was cancelled as a result of COVID19 restrictions.

On 27 February 2020 the BreFoe class was joined by Dr Chloe Brière of the Université Libre de Bruxelles who gave a presentation on the role of the EU in criminal law matters. This was followed by a public discussion on the impact of Brexit on transnational police and judicial cooperation in the area of Justice and Home Affairs and possible solutions for ongoing cooperation between the UK and the EU. 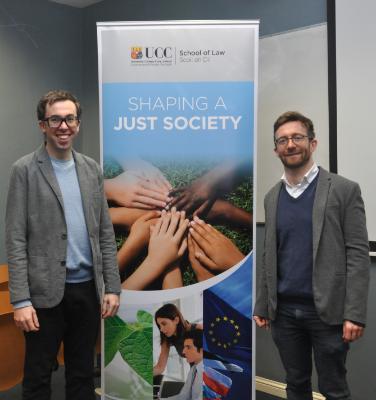 On 7 February 2020, Dr Graham Butler of Aarhus University, a world leading expert in the external relations of the EU, spent an hour with students of the module. This was followed by a public presentation on the legal framework for the negotiation of the future relationship agreement between the United Kingdom and the European Union.