Dr Jason Harris, on his way with two School of History PhD students to the annual Spoken Latin summer course in Lexington, Kentucky, was interviewed by Sean Moncrieff on Newstalk about the use of Latin and how or why historians might learn to speak it.

Dr Harris has launched a new Summer School in Spoken Latin (the Schola Latina) which will be held in Cork, 6-12 June 2017. Participants will be taught classes in which they will speak no other language but Latin for one entire week. Part of a ground-breaking new approach to studying Latin, which has grown out of the new MA in Renaissance Latin Culture established this year in the School of History, the course is offered to anyone with a basic knowledge of Latin grammar.

Anyone who wants to know why historians might want to learn how to speak Latin should watch an explanatory video by the Centre for Neo-Latin Studies in University College Cork. 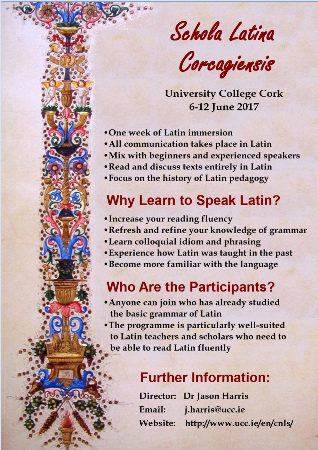