Student Insights - Molly and the Masque of the Red Death

A man or a figure.

It can’t be both it was a man!

A man or a figure.

And what did they say about this man?”

The Masque of the Red Death by Edgar Allan Poe is a short story, written in 1842, about the transient and fleeting quality of life and death. We stumbled across this short story serendipitously whilst attending a curated tour in the Crawford Art Gallery. This exhibition housed work by the famous Irish stained glass artist and illustrator Harry Clarke. After this visit we began to delve into the world of Harry Clarke’s artwork and we discovered that Clarke had been commissioned to create a series of highly evocative illustrations to illuminate Edgar Allan Poe’s collection of work entitled Tales of Mystery and Imagination. This collection includes the image below, depicting Clarke’s interpretation of the short story The Masque of the Red Death. 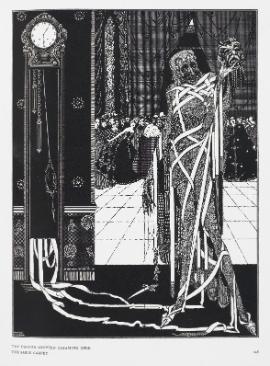 Upon discovering this beautifully crafted image, we were immediately transported into the world of Poe, Clarke and The Masque of The Red Death. Not only did this artwork give an overall aesthetic to our work but it also inspired us to explore the profound, poignant and thought provoking motifs and themes that are encapsulated in the highly descriptive piece.

The short story itself is a multi-layered, extremely complex tale that on first inspection has the feel of a tame horror story, a two dimensional piece merely intended to scare the reader. However, once the layers are peeled away it reveals an extremely harrowing and relevant story alerting us to the inescapable nature of death and how fleeting life can be.

The tale tells the story of a town devastated by a horrific plague, the Red Death, and a prince, Prince Prospero, who decides to throw an elaborate party in his secluded castle for all his wealthy, privileged friends. He orders that the castle be sealed shut so no one can get in or out, “The external world can take care of itself.” The castle is unusual in its layout, it has seven rooms all lined out in a row from east to west. The rooms are each elaborated decorated with a different colour of the rainbow, blue/purple/green/orange/white/violet/ crimson & black. Each room is lavishly decorated in fine materials like velvet and satin with sable carpets and a stained-glass window. In the final room, decorated in crimson and black, there lies a large ebony grandfather clock that clangs its deep horrifying clang every 3,600 seconds, or 1 hour. This clanging of the clock momentarily causes the partying’s to cease, a fear and a stillness to ripple through the castle and in amongst the party guest.

A masked figure turns up at the party leaving the guests and the prince baffled by his presence, the castle had been sealed shut so no one could get in or out. How? The prince orders the figure to be caught, unmasked and hanged at dawn for causing so much trouble. The Prince and all the party guests run after the masked figure and chase him through each of the seven different coloured rooms until the figure enters the last room coloured in crimson and black. This room also houses the domineering ebony grandfather clock. As the guests and the prince run inside, the figure begins to unmask himself, he is death itself. The prince and the party guests drop down dead one by one. All their partying could not help them escape the Red Death. Death knows no boundaries it is inescapable. 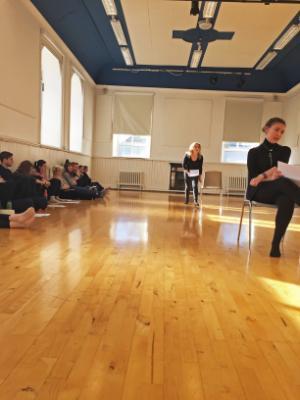 The adaptation process has been a journey of insight, experimentation and creativity for us in developing our FYP piece titled, '7.3.600'. We have tried to push ourselves in the work that we are creating and have developed a tight working dynamic with each other over the course of the last few weeks and months. In terms of form for the piece we have focused on the thematic qualities of the story as they are plentiful, such as the themes of life/death, the connotations of the number 7 and the use of colour to signify the different stages of life. We are telling the tale from the perspective of two-party guests trapped in a horrific cycle of life. This will all be delivered to the audience in a fragmented, distorted way by use of repetition of text and movement which we developed through various performative exercises in the rehearsal space and through playing around with the text. As with all Poe’s work the story is so rich with language and content, we were truly spoiled for choice in how we could mould the text and work with the beautiful imagery conjured up in Poe’s writing. It was an honour for us to intermingle our own ideas and writings with the work of such a famous and well-respected literary figure and a pleasure to work and play with his captivating story. 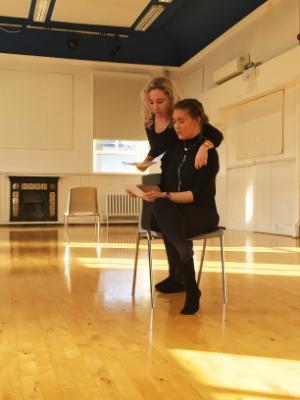 An element of the story that we were particularly interested in the emphasis on colour and the connotations that different colours have. Colour is an element that will be repeatedly referred to in our performance and in our staging. However, the aspects that fascinated us the most were the presence of the mysterious figure and the antics and motivations of the eerie ebony grandfather clock that seemed to possess a life-like persona in its ability to cause fear in the guests.

I’ll say no more on the ebony clock and the masked figure as to truly see the part they play in tormenting the unfortunate party guests of Prospero’s fateful party you will have to come and see the show, running in the Firkin Crane from March 7th-9th.