As part of the symposium, Professor Day delivered a lunchtime keynote seminar sponsored by The Physiological Society as part of the Department of Physiology Seminar Series.

“Descending the oxygen cascade: Portable measures of high altitude adaptation on an ascent to Everest Base Camp”.

Professor Day presented a fascinating and entertaining account from his 2016 expedition to Mount Everest Base Camp addressing cardio-respiratory acclimatisation to high altitude and the logistics involved in conducting field studies in challenging environments. David Burns and Ken O’Halloran were part of the 23 person team led by Day on the Everest expedition. 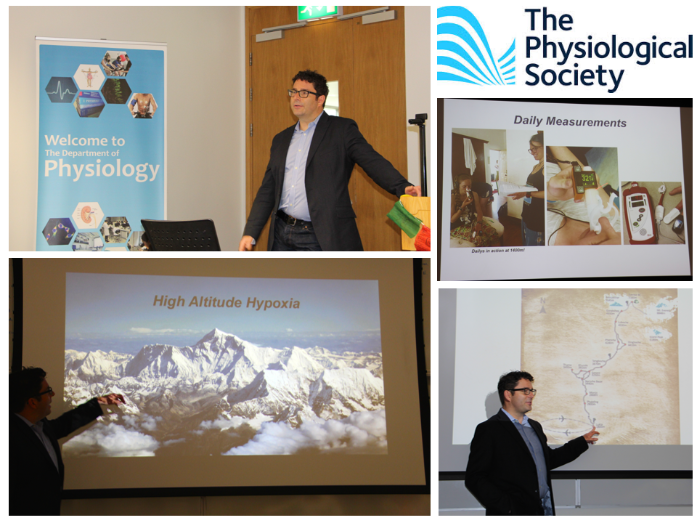 Professor Day’s group presented David and Ken with white Smithbilt hats, a long standing tradition in Calgary and a symbol of their Western hospitality and good cheer! During some downtime before heading to the international conference in Dublin, the Canadian group visited the local sailing village of Kinsale and the Cliffs of Moher, following a detour to Desert O’Dea castle, perhaps an ancestor of Trevor! Well done to all trainees who presented their work at Hypoxia Symposium Cork and Physiology 2016!

Jamie Pfoh: “Can we predict tolerance to high altitude based upon unacclimatized chemoreflex measurements?”

Marie Abrosimova: “The effects of tilt on the magnitude of respiratory sinus arrhythmia.”

Previous ArticleNext Article
Back to 2016