Professor Maeve McDonagh’s career with UCC School of Law began in 1991. A hugely respected and well-liked colleague, staff and students alike were sorry to see Maeve retire in early 2020.

As testament to the high regard with which Maeve was held during her time working at UCC, she has now been appointed as Emeritus Professor at the School of Law. Her colleagues are delighted to see such well-deserved recognition of Maeve’s contribution to the School and wider university.

We spoke with Maeve about her UCC journey, her personal highlights of her time with the School of Law, and the words of wisdom she would share with young academics starting out in their careers.

Maeve, you started working in UCC in 1991. What were your first impressions of the University, and the School of Law at that time, and how do you think things changed between 1991 and your retirement in 2020?

Having arrived in Cork from Australia and never having previously set foot in UCC, my first impression of the University was that the campus was very beautiful between the lovely old stone buildings, the river running through it, and the attractive and well-tended gardens. I am glad to note that thanks to careful planning and execution of the building programme over the years and the efforts of the general services team, the campus is still a most attractive place to work in or visit.

UCC School of Law (or Faculty as it then was) struck me from the start as a high calibre institution built on a strong tradition of sound legal scholarship.  It was clear to me that the Faculty was also progressive in its outlook and in the intervening years that progressive spirit has led to exciting developments in both teaching and research.

Positive developments from a student point of view have included the expansion in new programmes of study and new subject offerings.  The emphasis placed on developing students’ skills outside of the substantive law subjects also marks a positive change from my early days at UCC.  The opportunities available to students to study abroad have also greatly enhanced the student experience.

On the negative side however, the students of today appear to be more anxious than their counterparts were 30 years ago.  This is sadly a universal development, but it is one which the University and the School of Law are clearly aware of and committed to addressing.

With regard to research, there has been a positive change in the move towards greater engagement in research collaborations, for example with colleagues in the School of Law, other academics in UCC, and colleagues in other Irish or overseas Universities.

You mention that you have worked in Australia, and you’ve also spent time in Galway, and as a visiting researcher in various other universities, but the majority of your career has been in Cork. What, in your view, makes UCC a special place at which to teach and research law, and perhaps information law in particular?

Perhaps the main thing which has made UCC a special place to teach and research law is the camaraderie and team spirit within the School of Law.  Although academics may be surrounded by people for significant periods of time, in particular while teaching, the life of an academic can be quite solitary.  Having colleagues to bounce ideas off, to discuss tricky issues with, to engage jointly in research with, and to lean on when things got tough was a huge help to me over the course of my career.  This team spirit has been fostered at UCC School of Law through various means over the years with perhaps the simplest but arguably most powerful being the institution of the morning coffee break. While staff members are generally much busier now than they were when I first came to UCC, most will still make time to get together informally with academic and administrative colleagues a few times each week. The benefits of such informal get togethers are perhaps clearer now than they might have been in the past since current circumstances rule them out, but I hope that UCC School of Law will maintain this tradition when things return to normal.

In terms of my work on information law, it is an area of law that is cross cutting in its application and is therefore relevant to a wide range of other legal fields. As a result of the presence on the staff of the UCC School of Law of colleagues with international reputations in a range of legal fields, I have been able to engage in fruitful research collaborations on information law issues arising in areas such as human rights law, health care, commercial law, environmental law and electoral law.

I must also credit the calibre of students which the School of Law has attracted over the years.  I have very much enjoyed engaging with students, both in class and on a one-to-one basis, as they have developed their legal and analytical skills. I have learned a lot from my interaction with students both substantively and in terms of development of my own inter-personal skills.  I have very much enjoyed meeting our alumni over the years and hearing where their studies at UCC have led them. The success achieved by our alumni nationally and internationally in the legal professions, in the public service, in working with NGOs in areas such as human rights and the environment and in a wide range of other areas has always been a source of inspiration to me. 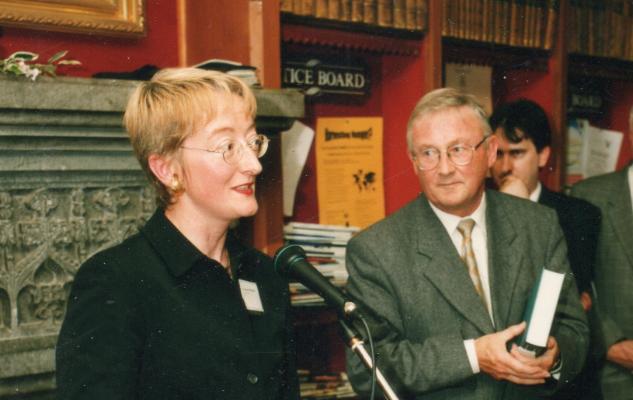 Professor Maeve McDonagh pictured with the late Mr Kevin Murphy, the then Ombudsman and Information Commissioner, at the launch of the first edition of her book, Freedom of Information Law, at UCC in 1997.

What were your personal highlights of your time at the UCC School of Law?

Personal highlights included pioneering the teaching of information technology law teaching at both undergraduate and postgraduate levels at UCC.  I am grateful to my then head of Department, the late Professor Sean O’Connor, for encouraging me to develop a new module on ‘Computer Law’ in 1993 against the background of a degree of scepticism emanating from certain quarters: one well known member of the bar was heard to refer disparagingly to the new offering at UCC School of Law as ‘Nintendo Law’.

The 1993 module content focused mainly on privacy and data protection, copyright of software, computer crime and legal issues relating to encryption. Despite the aforementioned scepticism, it was quite popular, especially bearing in mind that it covered material that students would not necessarily expect to encounter in the course of legal practice back then.

I am also very grateful that my position at UCC School of Law has facilitated my engagement with various governments and international organisations on the development of information law and in particular freedom of information (FOI) law. Having had exposure to FOI law in Australia when its legislation was in its infancy, I had the opportunity on my return to Ireland in the 1990s to engage with the public servants engaged in drafting the new Irish legislation. This formed a useful basis for the publication in 1997 of my book, Freedom of Information Law, now in its 3rd edition. My work on FOI subsequently led to invitations from national governments and international organisations to contribute to shaping emerging FOI legislation in such diverse jurisdictions as the UK and Kazakhstan.  While FOI laws may have their imperfections, the widespread acceptance of the general principle of the right of access to government information has brought huge benefits in terms of accountability, public participation in government, and the fight against corruption.

Finally, my position at UCC School of Law has given me the platform to contribute to the regulation and development of the media in Ireland through my membership of the Press Council of Ireland and latterly through my membership of the Broadcasting Authority of Ireland. Having started off my career in legal practice, I have very much enjoyed engaging in a practical way with the application of law in this area. As well as participating in regulatory work such as dealing with complaints against the media, I have greatly valued the opportunity it has afforded me to contribute to the work of these bodies aimed at supporting the independence and sustainability of the media. 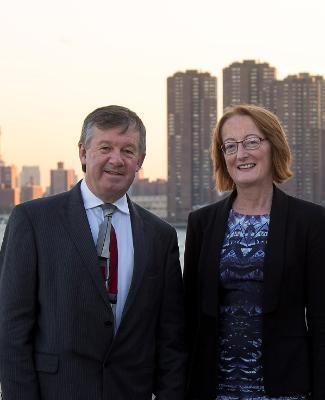 Professor Maeve McDonagh with then UCC President Professor Michael Murphy at a 2015 panel discussionon ‘Big Data and human rights’ , organised by the Permanent Mission of Ireland to the United Nations in conjunction with UCC, and held at the UN Headquarters in New York. © 2015 Michael Nagle

What does your recent appointment as Emeritus Professor at the School of Law mean to you?

I am delighted to have been appointed Emeritus Professor at UCC School of Law.  It is a great honour to follow in the footsteps of those who have gone before me.  I look forward to contributing to the future successes of the Law School in any manner that may be deemed appropriate.

What words of wisdom do you have for young academics embarking on a career at UCC?

The academic life is more demanding now than it was in was when I started out on my career and today’s demands extend far beyond the traditional focus on teaching and research. It is inevitable that urgent demands in one area will limit the time available to carry out other tasks.

My advice to young academics is not to be too hard on yourself. The boundaries of an academic career can be difficult to rein in and I believe that it’s important now more than ever that young academics do not feel pressure to contribute equally across all areas of activity all the time.

The other piece of advice I would give is to work on building relationships with administrative and academic colleagues both within the Law School and beyond. Having colleagues, many of whom will become friends, at your side will greatly enhance your journey through academia.

Commenting on the news of Maeve McDonagh’s appointment as Emeritus Professor, Professor Mark Poustie, Dean of the UCC School of Law said:

“It was with considerable sadness that I learned from Maeve soon after my appointment in 2019 that she intended to retire.  Maeve is a very eminent, highly regarded scholar particularly in the fields of information law and IT law and to lose her was a blow.  She has contributed hugely to the development of these fields over her career and had a real impact on the development of FOI legislation in a number of countries.  However, I was really delighted to be able to assist in securing a continuing role for Maeve at UCC as an Emeritus Professor and I look forward to her continued contribution to the School for many years to come”.