The class of 2018-9 graduated today with a Master's degree in Film and Screen Media, at a Conferring ceremony at which at Keynote was delivered by journalist and broadcaster, Nadine O'Regan. 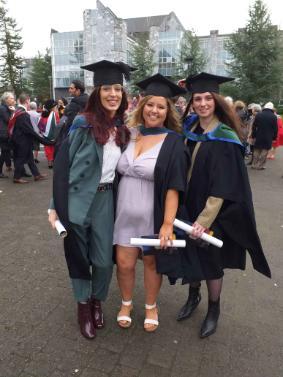 Over the course of their MA, our students explored a diverse range of topics, from essay films to Irish cinema; studies of film and screen media industries; amateur film and archives; French cinema and Canadian cinema; and they also had the chance to collaborate with our 2018-9 Arts Council/UCC Film Artist in Residence, Pat Murphy. For their final theses and projects, our talented bunch completed theses on Iranian cinema; androids on film; history and film; and produced films, narrative and documentary, exploring themes of memory and personal histories; the city of Cork; what feminism means in 2020; and figures of isolation

The Department of Film and Screen Media congratulates them on their wonderful achievements and wishes them the very best as they developed their careers as writers and filmmakers.
Previous Article Next Article
Back to News