What is the Ordnance Survey, what does it mean and where did it come from? It was established in 1791 with its headquarters in the Tower of London under the Master General of the British Board of Ordnance. Ordnance Survey is a historic amalgam of two key terms in the history of ideas and the governance of knowledge. Used since the eighteenth century in combination with the term survey it remains the name for the three official map-making bodies of Britain and Ireland. The first term ordnance or ordinance is derived from the French ordenance and the Latin ordin?re meaning to order, ordain, arrange, regulate or rule. From the fourteenth century it referred to militaristic warlike provisions or the decrees of a sovereign. Ordnance came to refer specifically to the artillery corps of the army and the British military remained in the survey’s Dublin headquarters until independence in 1922.

Survey means to oversee, the French surveoir combines the stem sur or over and veoir to see, the Latin vid?re or v?d?o. From the seventeenth and eighteenth centuries it had the sense of a view from a commanding position, an inspection or an examination. A survey was also a comprehensive mental view, a written description or the measurement of a tract of ground. It is a coordination of hand, eye and mind. The contemporary sense refers to any systematic collection or analysis of data, attitudes or opinions. In the first half of the nineteenth century the British Ordnance Survey of Ireland combined all of these senses from ordering to authoring, from inspection to measurement and from voyaging to voyeurism. Not unlike a nineteenth-century Guinness Book of Records it says that Peggy Frizell was a public character and an idiot and that a woman in Aghagallon had twenty-four children. It notes that Fanny Marlin of the village of Curran was a great fighter and a hermaphrodite. At present the Ordnance Survey of Ireland continues to map and pursue raw information, in Cork under the aegis of the Central Statistics Office, unaware of their long lost cousins the folklorists and ethnologists. One of the aims of this work is to retrace this genealogy.

This works takes an overview of the ethnographic or folkloristic aspects of the work of the nineteenth-century surveyors in Ireland. It is the first time that this has been attempted in any comprehensive manner. The work is based on original research and from within the perspective of the discipline of folklore and ethnology, itself an offspring of the earlier ethnological and folkloristic ideas that informed the survey. 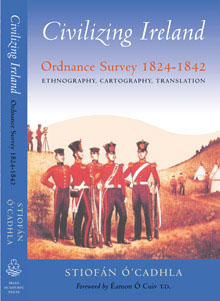