Programme of seminars and other research activities

To mark International Holocaust Remembrance Day (27 January) the Department of Italian, UCC, in collaboration with the Istituto Italiano di Cultura, Dublin, presents Una storia diversa. Ebrei a Campagna, 1940-1943 (Another Story. Jewish Prisoners in Campagna, 1940-1943), a documentary film in Italian with English subtitles by Maria Giustina Laurenzi. The director will present and discuss her film. 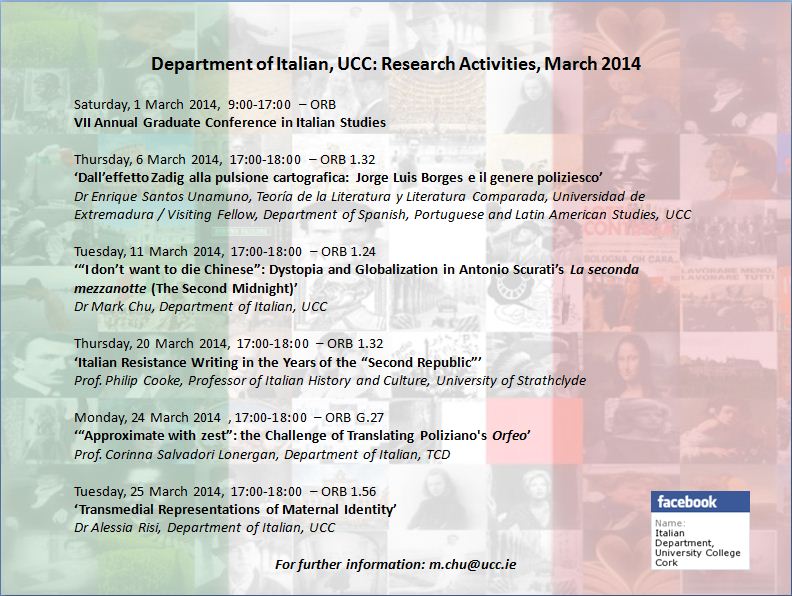 Programme to be published shortly at: http://www.ucc.ie/en/italian/conferences/annual_grad/

Chinese citizens constitute the third largest immigrant group in Italy. What was previously described as a “silent immigration” (Campani, Carchedi and Tassinari, 1994) has, in recent years, become the focus of popular, journalistic and academic attention, due largely to the growth of the Chinese economy and the consequent perceived threat to Italian businesses from Chinese companies both in China and in Italy. Similarly, Italian literature has, in the last twenty years, begun to register the presence of “the Chinese”, associating this with an idea of globalization linked to dystopic visions. This paper contextualizes and analyses one example of this recent trend, La seconda mezzanotte (2011; The Second Midnight), by writer and media studies academic Antonio Scurati. The novel is set in 2092, when what is left of Venice after a catastrophic flood has been sold off to a Chinese corporation as a playground for the rich.

Mark Chu’s areas of research include Sicilian literature from 1870 to the present and Italian crime fiction. This paper, based on a forthcoming article in the journal Narrativa,is part of his work on the representation of the Other in Italian literature and media, which has resulted in the publication of several articles, including 'Giallo sarai tu! Hegemonic Representations and Limits of Heteroglossia in Carlo Lucarelli‘ (2001), 'Crime and the South' (2011) and 'Impegno da vendere: società e politica nella serie del commissario Montalbano di Andrea Camilleri', and in papers including ‘Orientalism - Italian Style: Representations of the Other in Some Recent Italian Crime Fiction’ (Invited Lecture, U of Connecticut, 2001), ‘Representations of Immigrants in Contemporary Italian Literature and Media: A Critical Analysis’ (MLA, 2004), 'Ghi è tu ghe palla? Parody and the Migrant Voice in Contemporary Italian Crime Fiction' (RIA, 2011) ‘Domesticating the pericolo giallo: the case of Rabarbaro Zucca’ (ASMI, 2013).

‘Italian Resistance Writing in the Years of the “Second Republic”’

During the early 1990s Italy went through a period of intense political turmoil. The parties which had organised the Resistance movement from 1943-1945, and emerged victorious from the Second World War to dominate Italian politics ever since, disappeared from the map, or reconfigured themselves to such an extent that they appeared to lose all connection with their past. Given this ‘revisionist’ context, one might have expected a terminal decline, from the 1990s to the present, in what is broadly termed Italian Resistance culture. Yet, perhaps paradoxically, the period from the 1990s onwards has also seen the publication of many interesting works of literature (and historiography), to the extent that it is almost possible to speak of a revival. There is a sense that now the Resistance is no longer, to use a term employed by Stephen Gundle,  a form of ‘civic religion’, it is possible to determine a new cultural phase characterised in some cases by significant innovation. This new phase, in which the ideological and cultural paradigms of the past are less fixed, is the subject of this paper.  Works discussed include: Carlo Lucarelli, L’estate torbida (1991, translated as The Damned Season), Massimo Cirioni, Berto & Lucio (1997), Paola Soriga, Dove finisce Roma (2012) and Scrittura industriale collettiva (SIC), In territorio nemico (April 2013).

Phil Cooke has taught at the Universities of Edinburgh and Glasgow, and was visiting Professor at Pisa University in 2009. His research centres on the long-term impact of the Italian Resistance movement and, more generally, on twentieth-century Italian social and cultural history. Much of his work involves the collection and use of oral testimonies. His publications range from analyses of literary texts, Fenoglio’s binoculars, Johnny’s eyes (New York, 2000) to social/protest movements Luglio 1960: Tambroni e la repressione fallita (Milan, 2000) and Italian partisan exiles living clandestinely in Czechoslovakia (various articles). His most recent books are The Legacy of the Italian Resistance (New York, 2011) and Ending terrorism in Italy (Routledge, 2012 – co-authored with Anna Cento Bull). He is co-editor (with John Foot, Bristol), of the journal Modern Italy (published quarterly by Routledge/T+F) and co-editor (with Ben Shepherd) of The European Resistance  (Pen & Sword, 2013). He is currently working on a history (using a wide range of sources including oral testimonies) of the Florence Flood of 1966.

‘“Approximate with zest”: the Challenge of Translating Poliziano's Orfeo’

In this paper, presented in collaboration with the School of Languages, Literatures and Cultures and the UCC MA in Translation Studies, Corinna Salvadori Lonergan discusses the challenges she encountered in translating Poliziano’s text, and presents some of the solutions she found. The talk will also be of interest to those with an interest in early opera.

In this paper, Alessia Risi, who was awarded her PhD in October 2013 for a thesis on female figures in recent Italian crime fiction, explores contemporary fears and obsession with not being up to the role of motherhood and will identify how these anxieties are deconstructed (and denounced) in recent transmedial portrayals of Italian society: Alina Marazzi’s documentary film Tutto parla di te (Everything Talks of You, 2012), Loredana Lipperini’s critical essay Di mamma ce n’è più d’una (There Is More Than One Mother, 2013) and Nicoletta Vallorani’s novel Le madri cattive (Bad Mothers, 2011).