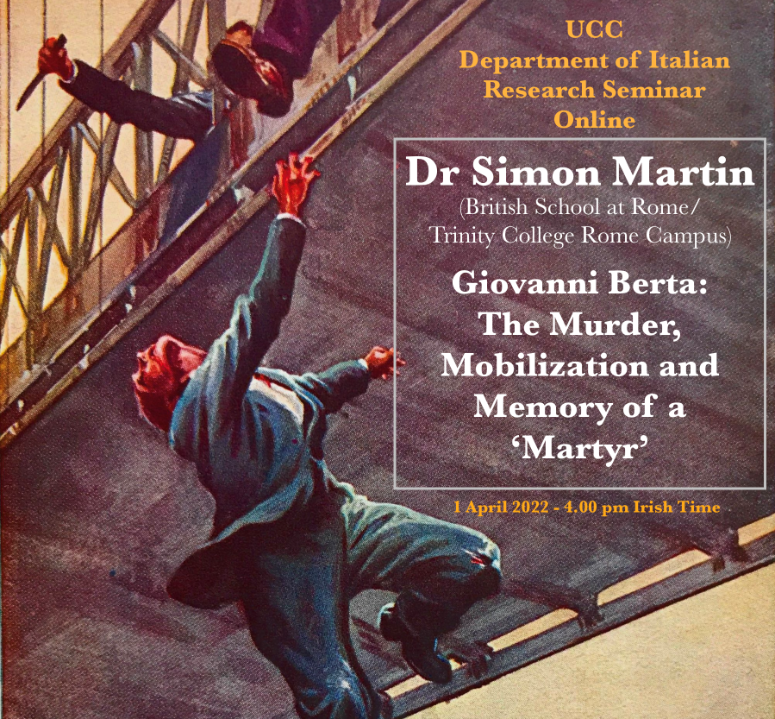 Giovanni Berta: The Murder, Mobilization and Memory of a ‘Martyr’

[Please note, you will receive the Zoom link a few days before the event]

Abstract: On 28 February 1921 Giovanni Berta was crossing the Ponte Sospeso in Florence. Violence had rocked the city since the bombing of a patriotic parade and the subsequent murder of the Communist, trade union leader Spartaco Lavagnini, the previous day. Minutes later Berta was also dead, drowned in the Arno apparently by Communists. Declared a Fascist ‘martyr’ almost immediately, his status was reflected in the naming of the Florence football stadium, Italian streets, a naval vessel and a colonial village in Libya after him. Articles throughout the ventennio sporadically reminded readers, as did a number of striking paintings and postcards. A section of the bridge parapet from which he fell was also included in the Exhibition of the Fascist Revolution and a separate show dedicated specifically to his memory held in Florence, in 1934. This exhibition also accompanied the opening of the ‘Sacrario dei Caduti per la Rivoluzione Fascista’, in a crypt beneath Santa Croce, where Berta was re-interred alongside his 36 fallen Florentine comrades. His memory is still preserved on the bas-relief of the ex-Casa del Fascio in Bolzano and numerous drain-covers in Rome, especially, and Florence, which bear the Fascio Littorio and the name of the family’s iron foundry: ‘Fonderia Giovanni Berta’. Cited by a number of historians, no such study of Berta’s death or the construction and survival his ‘martyr’ status exists. Given his primary status in Fascist martyrology, this is extraordinary. This paper will explore the memory of Giovanni Berta through this representation various representations of the ‘martyr’ in Fascist material culture. With much of this remaining in situ, it will also bring his memory into the contemporary context and shed further light upon the growing interest in Fascist material culture, memory and ‘difficult heritage’.