Researcher Luke has recently traveled to MARUM in the University of Bremen, to collaborate with Dr. Jürgen Titschack, a sedimentologist who specializes in heterozoan carbonates and CT processing of cold-water coral cores.

Over the past few months, Luke has been working closely with the Radiology Department in the Cork University Hospital (CUH), who have scanned the cores retrieved during both legs of the CoCoHaCa cruises using their onsite CT-scanner. This method can serve to be a highly useful and non-destructive tool for creating high resolution imagery of the internal structures of the cores. When the radiographers optimized and finalized the scan settings, each core was then transported to the hospital to undergo high dose scanning and imaging (at frequencies usually not exposed to humans!). The resulting scans were then extracted from their system, allowing them to be transported to Bremen for processing.

Dr. Titschack is an expert in using the image processing software Amira - a powerful 3D / 4D platform for manipulating and modeling several alternative modality datasets (CT, MRI, 3D Microscopy etc.). It has, in the past, allowed him to characterize the growth dynamics of cold water coral cores, which served as the basis for several of his publications, and is commonly cited in literature as a result. His work has influenced this part of Luke's project, as it gives a clear and very comprehensive overview of understanding cold water coral habitats.

The processing itself can be tedious. The datasets can comprise of several thousand images making up a single meter of core, which as a result, specialized CT-workstations must be used, built with powerful processors and graphic chips. To render 3D images from each of these datasets, time must be on your side. Even with a streamlined method, you can always expect to come across some unique problem, which is usually solved with a unique solution. Some cores might require meticulously going through each 0.625 mm slice and pick to highlight coral pieces. Amira itself requires the user to build "networks" which can be composed of an endless amount of commands and inputs. Therefore, getting to know the ins and outs of the platform is crucial. Currently, Dr. Titschack works with the developers of the software, continuously building new algorithms and commands for his ongoing research. 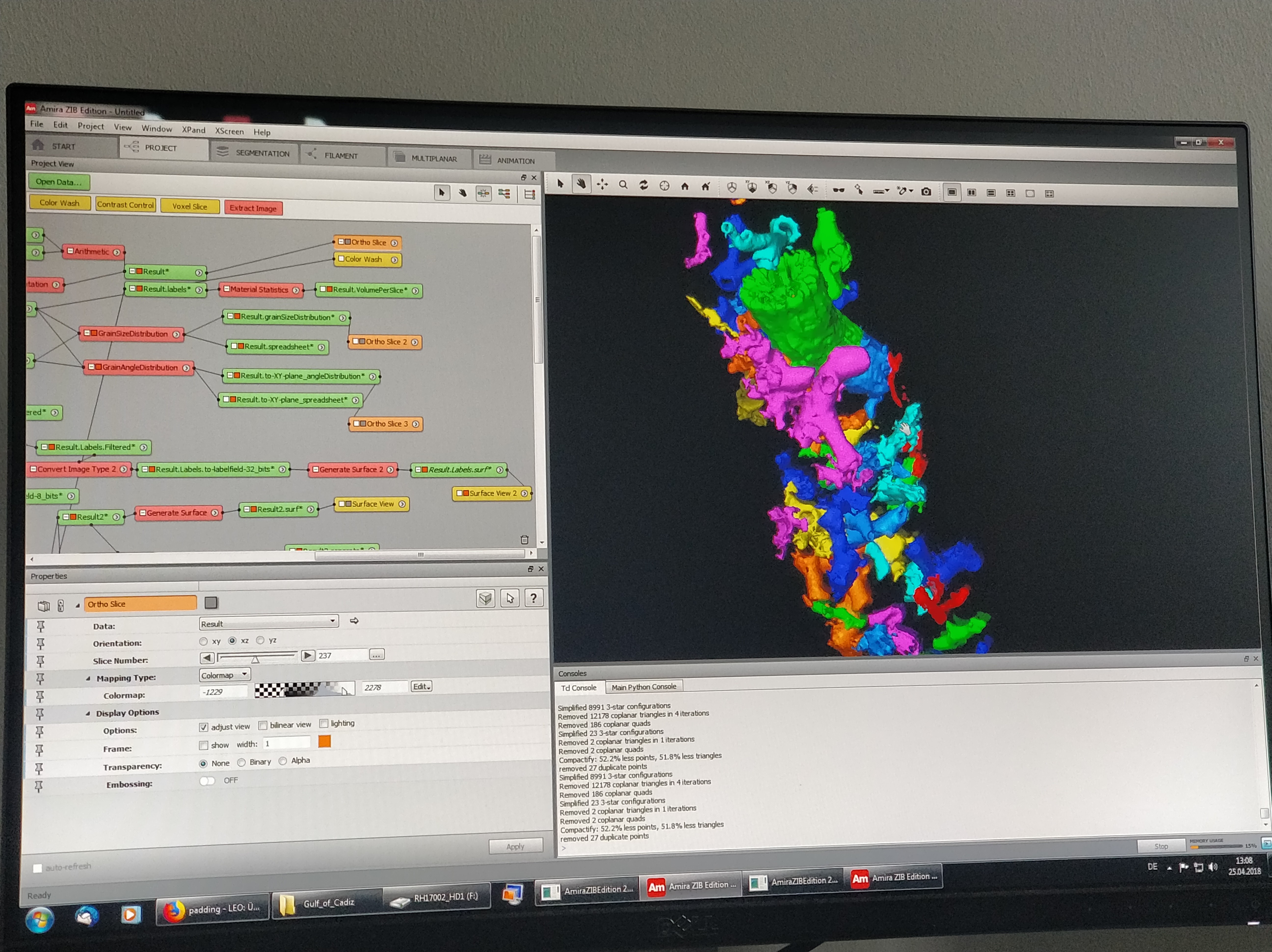 A typical network built by Luke to process the cores. Each command is connected with specialized algorithms and display ports, creating an extensive web-like network.

See below for an example of the final product. From left to right, it shows a CT scan through the z axis of the core, which gives a good overview of the internal structures. To its right is a rendering of all coral material minus the matrix sediment. These can be differentiated due to their density differences. Next is a core which has all coral pieces less than 2cm removed, giving better clarity to spans of favorable growth. Each coral piece is assigned a unique color code through an algorithm, which helps in singling out individual pieces. The first graph, should be read like a 3-dimensional histogram, where the size of the of each coral piece plus their occurrence, is plotted as a 'heatmap'. To explain this further, areas of red (or 'hot') relate to a high integer of coral pieces, that are within the same bin size. Size is represented as how left or right-most you are on the graph, with left being large (6cm) and right being small (0 cm). If you refer to the figure, you can see that for the first few centimeters of the core, pieces are quite large, but they eventually become smaller, perhaps due to an erosive event. This is clearly seen by the 'heat signature' progressing more so to the right of the graph. The second graph functions similarly, however, it displays the orientation of the longest axis of each coral piece through the core, with the leftmost side representing a 0 degree orientation from the horizontal and the rightmost side representing a 90 degree orientation from the horizontal. Using both all of these parameters, it is possible to narrow in on periods of healthy successful growth and periods dominated by more erosive events. The data shown here is produced with raw data, which can be further analysed to determine sediment densities down core, coral:matix ratios and bioturbation. 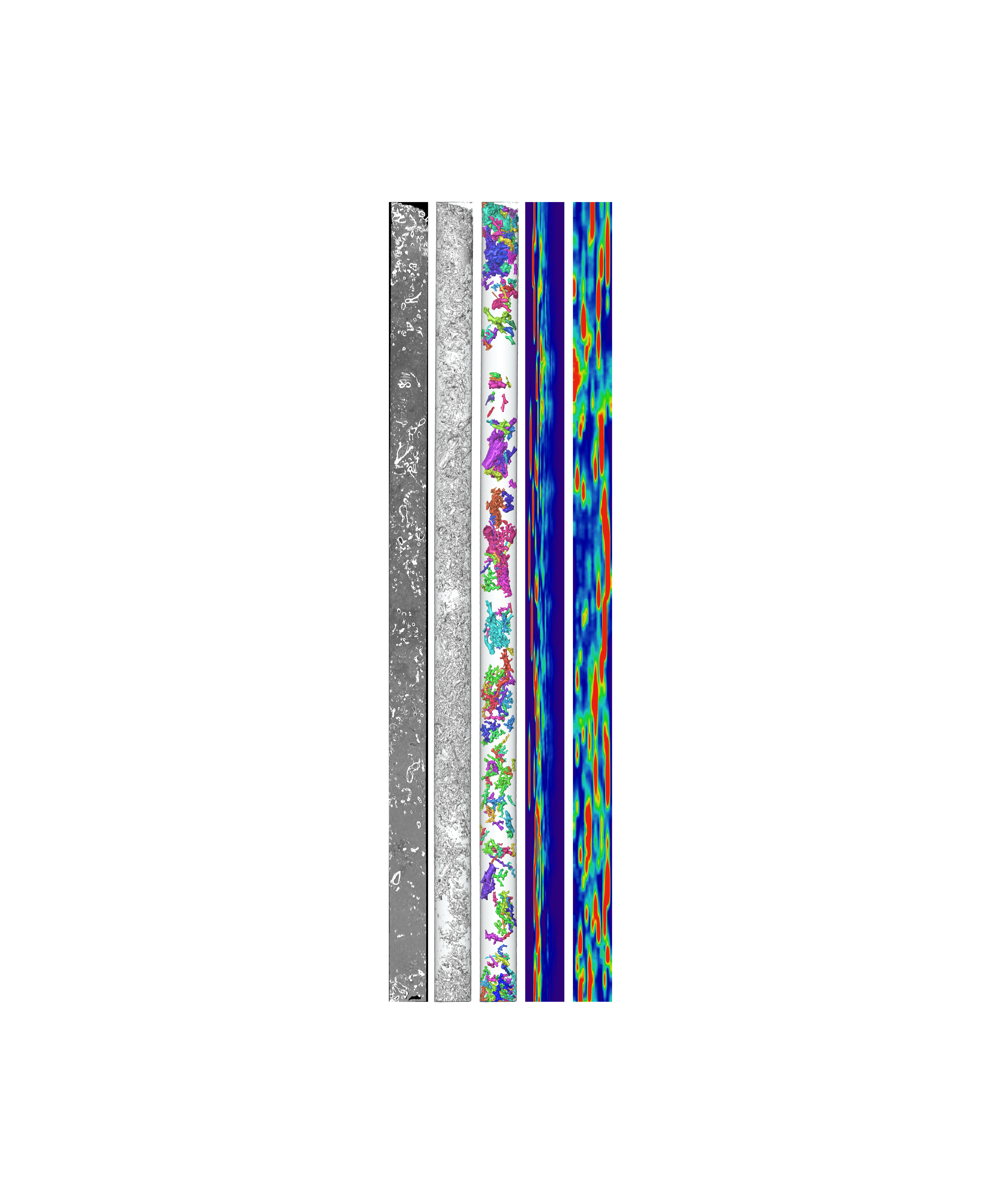 Luke's 3 week span in Bremen is soon coming to an end. The data that he has processed there will be pivotal in answering important questions about his research area. He would like to extend a warm thank you to all at MARUM, especially Dr. Jürgen Titschack, all of whom made his stay equal parts valuable, memorable and enjoyable. If you are interested in finding out more about Amira, visit their webpage at https://www.fei.com/software/amira-3d-for-life-sciences/ To find out more about Jürgen's work visit his reseach gate at https://www.researchgate.net/profile/Juergen_Titschack