We are hugely proud of faculty at the School of Law who have been recognised for their work and varied achievements throughout 2019.

Dr Maria Cahill and Dr Conor O’Mahony were recognised at this year’s UCC Staff Awards. Dr Cahill received a President’s Award for Excellence in Teaching 2018-19 having been nominated by students and graduates of her LW3366 Advanced Legal Reasoning module. Dr O’Mahony won a UCC Research Award in recognition for his work in communicating research in an accessible form to non-academic audiences.

Professor Deirdre Madden appointed to the Board of the HSE

UCC School of Law's Professor Deirdre Madden was appointed Deputy Chair of the HSE Board earlier this year. Under the Health Service Executive (Governance) Bill 2018, the Board is the governing body of the HSE and is accountable to the Minister for Health for the performance of its functions.

The Minister of Health appointed UCC School of Law lecturer Dr Mary Tumelty to the Health and Social Care Professionals Council this year. Dr Tumelty was appointed as a person whose qualifications, interest and experience, in the opinion of the Minister, would be of value to the Council in performing its functions.

Dr Crowley was also appointed as an Associate Fellow of the International Academy of Family Lawyers this year, and to the Board of the Crawford Art Gallery Cork by Minster Josepha Madigan, Minister for Culture Heritage and the Gaeltacht.

UCC School of Law’s Dr Stephen Coutts won an Erasmus+ Jean Monnet Module award this year, which will allow him to develop an deliver a postgraduate module on Brexit and the Future of Europe. A Jean Monnet Module is a short teaching programme (or course) in the field of European Union studies at a higher education institution.  The aim of the modules is to promote research and teaching experience among young researchers, scholars and practitioners in EU issues, foster the publication and dissemination of academic research, create interest in the EU, foster the introduction of an EU angle mainly into non-EU related studies and deliver tailor-made courses on specific EU issues relevant for graduates in their professional life. 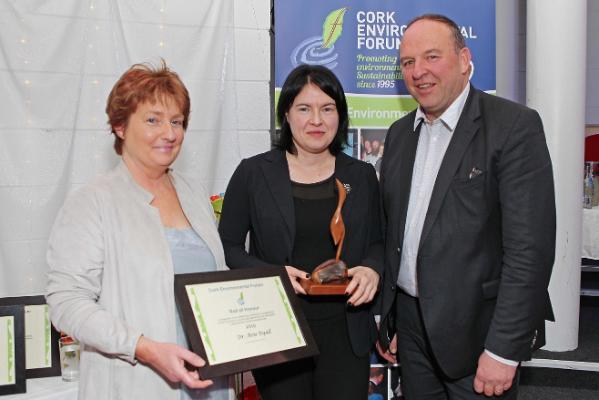 Dr Áine Ryall, Centre for Law and the Environment, was awarded the Public Sector Award at the Cork Environmental Forum Awards earlier this year. The Awards acknowledge, honour and celebrate the outstanding actions of groups, organisations and individuals that are in keeping with the spirit of sustainable development and community resilience, including raising awareness on environmental sustainability.

Two UCC School of Law initiatives - Teaching Environmental Law for Policy Innovation and Impact and Experiential Learning for Dispute Resolution - were successful this year in their funding applications to the National Forum for the Enhancement of Teaching and Learning in Higher Education.

Professor Ursula Kilkelly reappointed to Oberstown Board of Management

The new Board of Management of Oberstown Children Detention Campus was appointed by Minister for Children and Youth Affairs, Dr Katherine Zappone, TD on 1 June 2019 under the Children Act 2001. The Minister re-appointed Professor Ursula Kilkelly of the School of Law to the position of Chairperson of the Oberstown Board for a period of four years.