At the School of Law, public engagement is an essential pillar of our work. Throughout the year, our faculty have engaged with Government, civil society, NGOs and the public with the aim of shaping a just society for all, both in Ireland and abroad.

We were delighted to be joined by Chief Justice of Ireland, Mr Justice Frank Clarke, this year for the relaunch of the Irish Legal Information Initiative. IRLII – which now has its own Twitter account and website – publishes links to judgments of the Irish courts that are keyword searchable, as a constituent member of the global Free Access to Law Movement.

Dr Conor O’Mahony, Director of the Child Law Clinic, was this year appointed as Special Rapporteur on Child Protection for 3 years by the Minister for Children and Youth Affairs. 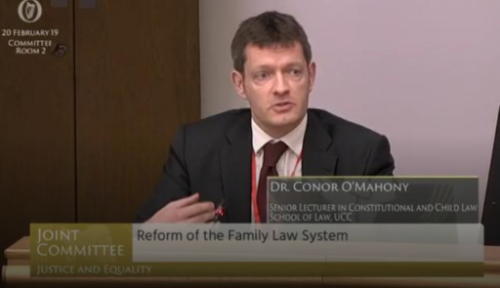 Dr Conor O’Mahony addressed the Oireachtas Justice Committee Hearing on Family Law Reform this year, speaking of the obligation to ascertain the views of children, and the structure of the courts system.

2019 saw the full commencement of the EU Commission DG Justice funded JCOERE project concerning judicial co-operation in Europe in the specific context of corporate insolvency, rescue and turnaround. The School of Law JCOERE research team - Prof. Irene Lynch Fannon (PI), Dr. Jennifer Gant (Post- Doctoral Researcher), Aoife Finnerty (Researcher) and Molly O’Connor (Project Manager) - leads the consortium which includes the University of Florence, the University Titu Maiorescu in Bucharest and INSOL Europe which is one of the leading organisations on insolvency law and practice in Europe.

The School’s Child Law Clinic secured a major ruling against the Government in relation to redress for sexual abuse survivors and was even singled out for thanks in the Dáil during Leaders’ Questions as a result. In a decision that was welcomed by the Clinic and survivors of sexual abuse, Mr Justice Iarfhlaith O'Neill ruled that the State had misinterpreted a ruling by the European Court of Human Rights (ECHR) and in doing so has denied victims of child sexual abuse access to a redress scheme to which they are entitled.

Commissioned by the UN, the Global Study on Children Deprived of Liberty is the world’s first comprehensive analysis of the subject of all forms of child detention – from institutional care to child justice, from children imprisoned with parents to migrant detention. Professor Ursula Kilkelly, Dr Louise Forde and Ms Deirdre Kelleher from the School of Law contributed to this hugely important study for children’s rights.

The Higher Education Authority awarded €350,000 - the maximum funding available - in Performance Funding to UCC for the case study “Bystander Intervention” to support the university’s response to the requirements outlined in the National Framework to End Sexual Violence and Harassment in HEIs. The proposal was regarded as a high impact project with significant potential for national roll-out and wider dissemination of learning in the system. The 2 year project will be led by Dr Louise Crowley in the School of Law. The Bystander Intervention programme continues to expand. This year, an online programme developed and launched by the Minster Mary Mitchell O’Connor, Minister for Higher Education (see below). 3,500 first year students have received bystander orientation, 287 UCC students have enrolled online since 1 January and seven secondary schools are piloting the programme with Transition Year students. 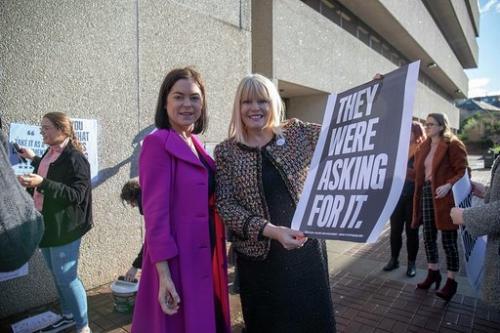