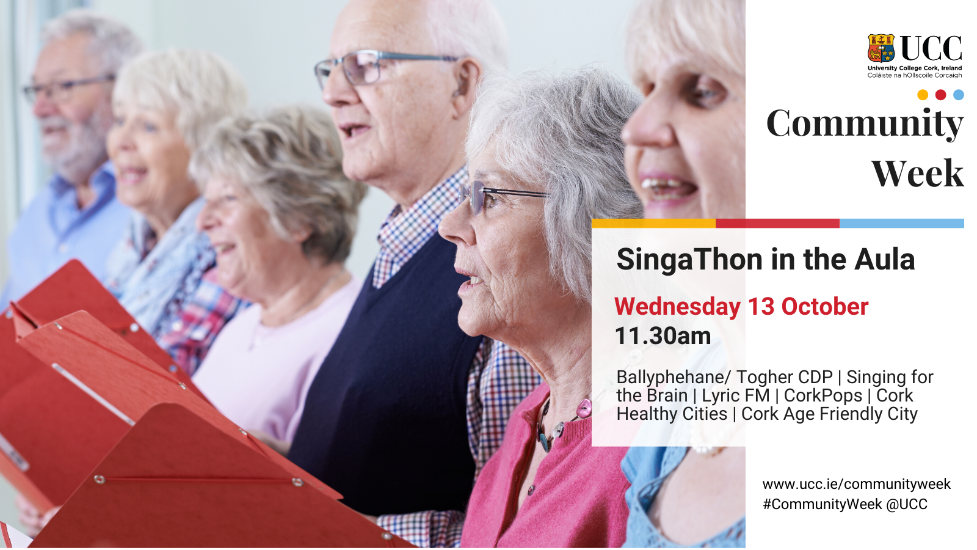 “Keep your hearts up and keep singing”

Since starting out as an initiative to support older people during COVID19 and cocooning, this over 60's singing group have only once been able to gather in person to sing together. This one of a kind SingaThon event welcomes this 35 member ensemble to perform in the unique surrounds of UCC's Aula Maxima.

Fiona Flavin, Musical Director of Singing for the Brain has led a weekly online singing class for the group of singers, whose members come from Ballyphehane, Togher, Turners Cross, Douglas and Mahon, brought together by the Ballyphehane Togher Community Development Project. The catalyst for the formation of the group was a songbook compiled by RTÉ Radio One’s Lillian Smith, as part of a lock-down activity pack circulated to older members of the Cork community.

In September 2021. with Lyric FM’s Evelyn Grant as MC and Cork Pops’ Gerry Kelly directing, the group had their debut in person gathering in Coughlan’s outdoor space.

Now, as part of UCC’s Community Week they will perform once again in UCC’s Aula Maxima and with a prgramme drawn both from the Song selection compiled by Lillian Smith and from the repertoire of Cork Pops Orchestra, who have led the Tea Dances at City Hall for many years.

Ballyphehane Togher Community Development Project is a small, dynamic, community anchor project on the south side of Cork city. The project is managed by local people to respond to local needs. Find them on Facebook here.

Singing for the Brain is a HSE Cork Kerry Community Healthcare supported initiative with groups across Cork City and County.

Cork Healthy Cities - Cork is a designated World Health Organisation Healthy City since January 2012. A WHO Healthy City is one that continually creates and improves its physical and social environments and expands the community resources that enable people to mutually support each other in performing all the functions of life and developing to their maximum potential.  Cork Healthy Cities  is based on a recognition that population health is not merely a product of health sector activities but largely determined by policies and actions beyond the health sector.

Cork Age Friendly City -  Cork was designated an Age Friendly City in April of 2019 and was one of 31 Local Authorities who were presented with their WHO Charter in December 2019. In response to the pandemmic Cork City Council provide a collection of of resources from city-wide organisations to support older people in the community here.