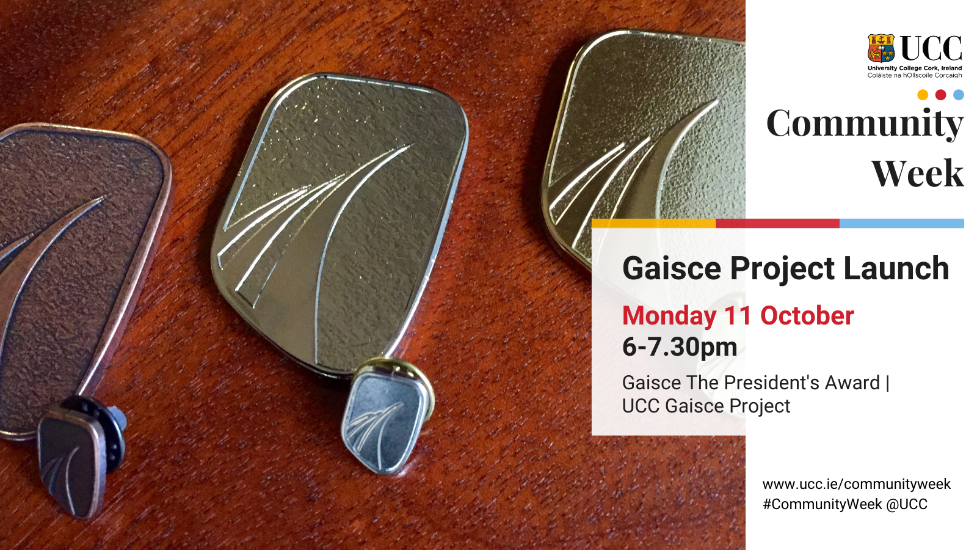 The UCC Gaisce Project will be officially launched on October 11, at 6pm, in Boole Basement 4, as part of UCC Community Week. Guest speakers will include the President of UCC, Professor John O'Halloran, the CEO of Gaisce, Yvonne McKenna, and UCC Alumnus and Member of the Gaisce Council, Dr. Ali Khan.

Whether you already volunteer, or are looking to begin volunteering, The UCC Gaisce Project is an excellent opportunity to make friends, develop skills and to reach your full potential.  Gaisce is the most prestigious youth award in Ireland. To achieve a Gaisce Award, participants need to complete activities for at least one hour a week in each of the three challenge areas which include Personal Skill, Community Involvement and Physical Recreation. Participants must also undertake an Adventure Journey and an additional Residential Project and Portfolio at Gold.

Gaisce is focused on, and driven by, the following core values:

The UCC Gaisce project is led by a number of students who are working in partnership with staff to establish and embed long-term insitutional support for the operation of Gaisce in UCC.

Professor John O’Halloran became the 16th President at University College Cork in September 2021, having guided UCC through the pandemic as Interim President since September 2020. He is an academic leader with an ambitious vision for the future of higher education, and an advocate for inclusivity in education, the transformative power of collaboration and forging a sustainable future. Professor O’Halloran is committed to developing an inclusive culture at UCC, where equality is upheld, and diversity is respected. He is dedicated to putting sustainability at centre stage in UCC, in the community and beyond. Under his leadership UCC became the first third level institution worldwide to receive the Green Campus award in 2010 and is now ranked as one of the most sustainable universities in the world.

Yvonne McKenna is CEO of Gaisce – The President’s Award. She believes passionately in the power of volunteering to create better societies – more tolerant, equal, inclusive, cohesive and questioning – and is particularly interested to ensure young people are encouraged and supported to be active in their communities, and shape them. She has been an active volunteer for over 25 years, currently sits on the National Volunteering Strategy Implementation Group and is a board member of Henrietta Street School. Prior to Gaisce, Yvonne was CEO of Volunteer Ireland and dedicated almost a decade of her career to developing volunteering infrastructure in Ireland.

Dr. Ali Khan is a UCC Alumnus and currently serves on the Gaisce Council (Board of Directors). He is also currently completing an MSc in Global Governance and Diplomacy at the University of Oxford. Prior to this he practiced as a Dentist/Dental Surgeon in private practice in Dublin and concurrently obtained an Executive MBA with Distinction from Trinity College Dublin. He graduated in Dentistry/Dental Surgery from University College Cork in 2016, where he served as Chairman of the UCC Student Council, and received numerous university and national honours & awards, including the prestigious Gaisce: President’s Gold Award from President Michael D. Higgins and the UCC Student Leadership Award from President of UCC, Dr. Michael Murphy.

Gaisce - The President's Awards is a self-development programme for young people aged 15 -26 which has been proven to enhance confidence and wellbeing through participation in personal, physical and community challenges. It is a direct challenge from the President of Ireland, Michael D. Higgins, to all young people to dream big and realise their potential. Non-competitive and self-directed, participants choose their own activities, goals and projects with the support of their President’s Award Leader (or PAL). There are more than 1,000 President’s Award Leaders working or volunteering in a variety of organisations all across Ireland, supporting and mentoring Gaisce participants.

Gaisce was established in 1985 – the UN International Year of Youth – as the national youth award and Ireland’s highest recognition of a young person’s achievement and voluntary contribution. To date, more than a quarter of a million young people have achieved their Gaisce Award. And counting …

Today more than 20,000 young people under 26 register to pursue their own Gaisce Award journey annually.

A Student-Led Initiative - Orla Leahy (BCLGA Student) is Chairperson of the UCC Gaisce Project. Orla has spearheaded the UCC Gaisce Project, together with her student peers in UCC Students' Union, Clubs and Societies. Their initiative is championed by Paul Moriarity Director of Student Experience at UCC with the support of Gaisce, the Civic and Community Engagement Committee and a newly formed UCC Gaisce Project Committee. The Committee is made up of staff drawn from across a number of UCC departments and initiatives that support a quality student experience, enabling opportunities for students to engage in volunteering and other extra-curricular activities and experiences that enhance their personal and professional skills, values, and attributes.