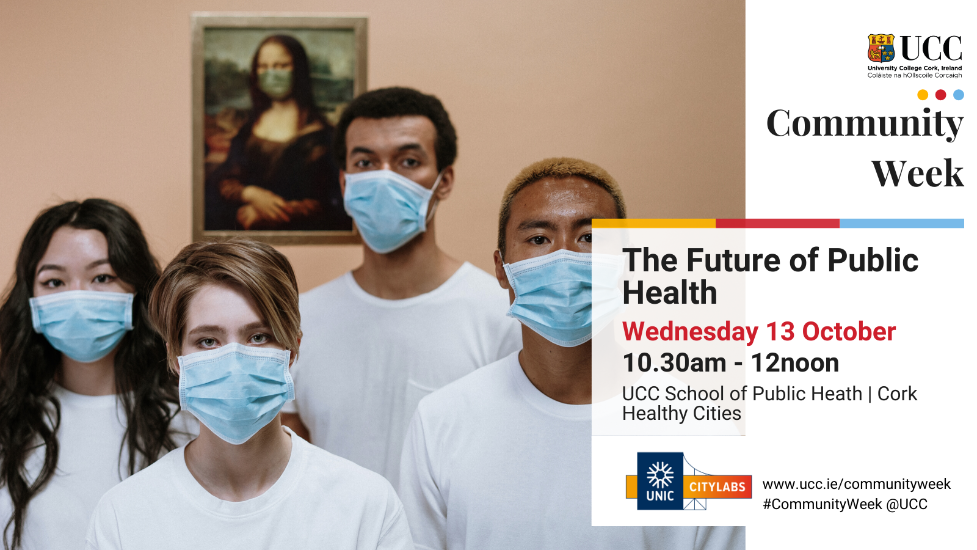 Since early last year, the global pandemic has brought the complex landscape of public health into sharp focus,  highlighting in particular, the inseparability of local and global approaches and responses.  In this online event, guest keynote speaker Prof Martin McKee joins Prof Ivan Perry, Dean of UCC’s School of Public Health, and Denise Cahill, Cork Healthy Cities Coordinator, for a discussion on ‘Healthy Cities – The Future of Public Health’.

This panel discussion will be chaired by Dr Sara Burke , Research Assistant Professor of Health Policy in the Centre for Health Policy and Management, in the School of Medicine, Trinity College Dublin.  Openign performance by Sadhbh Goodwin, UCC Quercus Creative and Performing Arts Scholar.

Prof Martin McKee is Professor of European Public Health at the London School of Hygiene and Tropical Medicine. He was founding director of the European Centre on Health of Societies in Transition, a WHO Collaborating Centre, which he led for over a decade. He is also research director of the European Observatory on Health Systems and Policies, a unique partnership of universities, national and regional governments, and international agencies and a Commissioner and Chair of the Scientific Advisory Board, of the Pan European Commission on Health and Sustainable Development, reporting to WHO EURO.

Cork Healthy Cities: Cork has been a designated WHO Healthy City since January 2012.  ‘A WHO Healthy City is one that continually creates and improves its physical and social environments and expands the community resources that enable people to mutually support each other in performing all the functions of life and developing to their maximum potential’. In February 2021, Cork Healthy Cities published its 10-year action plan. The plan sets out a series of health related actions for Cork City in line with the WHO and Healthy Ireland policies.

UCC School of Public Health: Prof Ivan Perry is the Dean of Public Health at University College Cork and a member of The Independent Scientific Advocacy Group (ISAG). He is an epidemiologist with an international profile in public health nutrition. Since 2008, he has been principal investigator on the Health Research Board’s Centre for Health and Diet Research—one of Europe’s leading interdisciplinary centres of excellence in public health nutrition. Over the past two decades he has led the development of The School of Public Health in UCC, to now be the largest dedicated academic centre for public health in the Republic of Ireland.