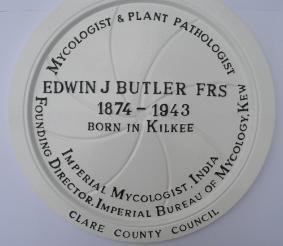 A plaque was unveiled in Kilkee, Co. Clare this Tuesday in honour of a scientist who studied at Queen's College Cork (now University College Cork) and went on to be one of the greatest plant pathologists and mycologists of his generation.

The event at Kilkee Library, was organised to honour Sir Edwin John Butler FRS. Born in Kilkee in 1874, Butler went on to study medicine at Cork but never practiced. Developing an interest in fungi and plant pathology, he was eventually to become known as the "Father of Indian Plant Pathology" and the founding director of the Imperial Bureau of Mycology at Kew, London. This organisation is now known as CABI.

Butler's book 'Plant Pathology' was to become the international standard for teaching the subject. Butler was a Fellow of the Royal Society (FRS) and he was knighted in 1939.
Tuesday's event was attended by Prof. Peter Jones, Acting Head of Plant Science at UCC who gave a brief outline of Butler's connection to Cork. 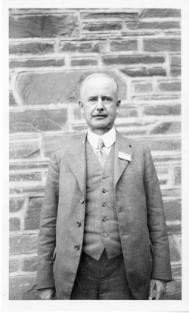 His Excellency, the Indian Ambassador to Ireland Mr. Debasish Chakravarti was also in attendance to mark Butler's contribution to science in India. The Mayor of Co. Clare, Pat Hayes unveiled a plaque in Butler's honour at the newly renovated Kilkee Library.

Edwin Butler is also commemorated by the Butler Medal, which is awarded by the Society of Irish Plant Pathologists; as well as by a building bearing his name at the School of BEES, UCC. It is planned to further commemorate Butler by the erection of a plaque at the Butler Building, UCC in the near future. The School of BEES also awards the Butler Prize to the best final year student in the Environmental Plant Biotechnology or Ecology degrees.