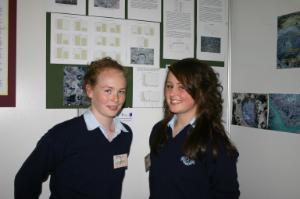 Rhianna McMahon and Niamh McNamara are two second year students at Mary Immaculate Secondary School in Lisdoonvarna.  They both live in North Clare and are not very far from the sea. As a result they became interested in marine biology and love exploring the seashore. Last summer they were examining the Doolin rock pools at low tide and found a lot of sea urchins in small crevices. They noticed that a lot of the urchins had shells or stones on top of them and then wondered why.

Their biology teacher, John Simms, contacted Professor Gavin Burnell (BEES, UCC) on their behalf and he was able to give them some advice on how to devise a series of experiments to investigate this phenomenom.  Interestingly a former member of staff from the Discipline of Zoology, Dr Ann Crooks, had published several papers on this topic which were referenced by Rhianna and Niamh in their project.

The resulting project was entered in the BT Young Scientist exhibition for the first time in January 2012. The two Clare students then went on to compete in the Northern Ireland Young Scientist competition on June 19th where they won the Society of Biology award for the best biological project at the event.

We would like to congratulate these two young scientists on their outstanding achievement and wish them well in the remainder of their school career.