Marine geomorphology of the day: a fragmented topography

The bathymetry data south-east of Kilkeel (County Down) is characterised by a gently sloping seabed, irregularly incised by dead-end channel-like features close to the coastline and hummocky terrain with fine elongated ridges in the mid-section. In the deepest part of the bathymetry data, a fragmented and irregular topography appears, with isolated landforms distinguished by a peculiar polygonal shape, almost regular at times (figure below - left). These puzzling features are the subject of the blog today: we’ll have a closer look at them and try to understand how they formed. 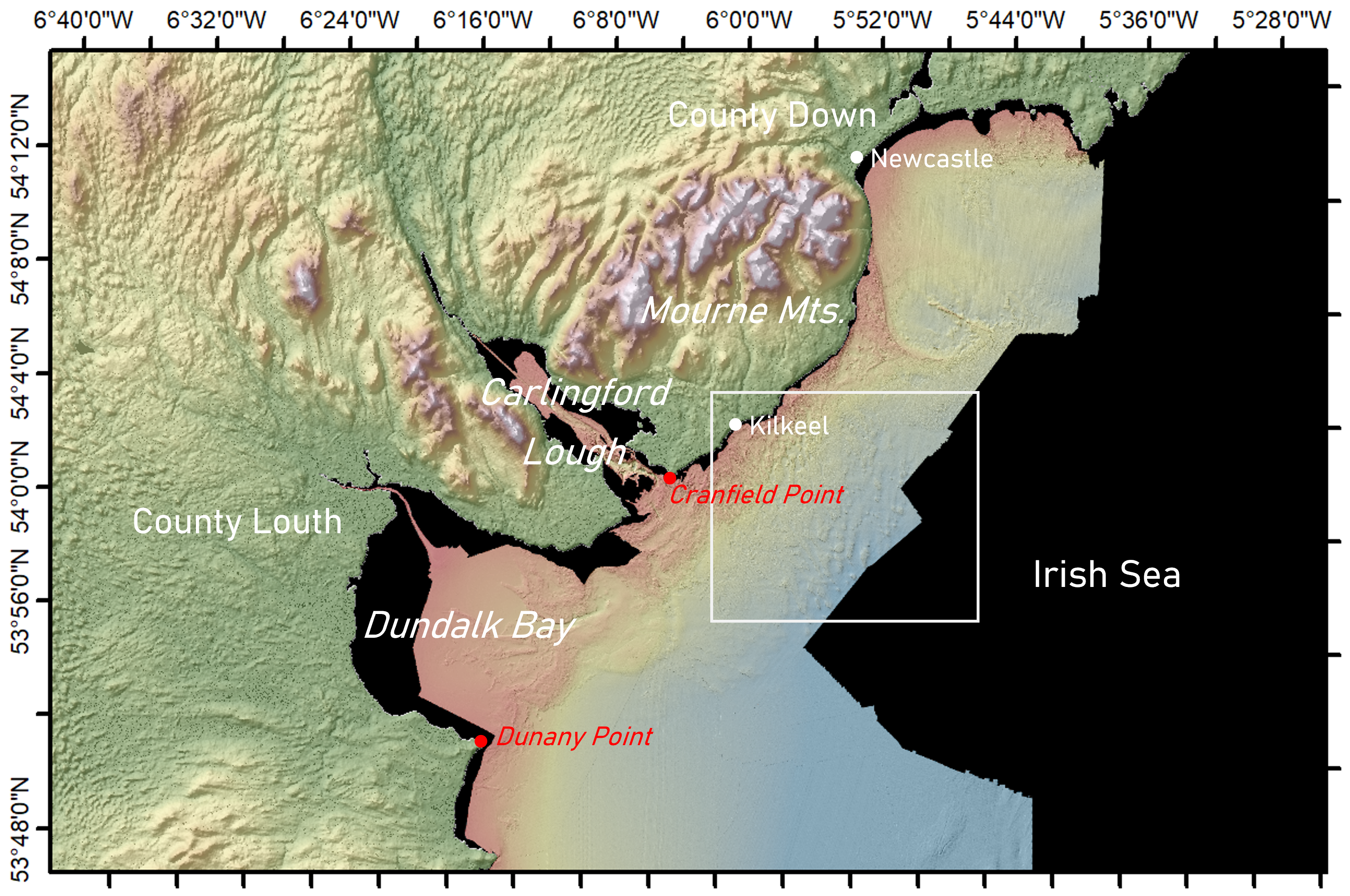 First of all, some figures. The dimension of these landforms vary, they can be from 100 m to > 1 km long, between 50 and 750 m wide and from 2 to 4.5 m high (figure below, right). The top surface is consistently and gently dipping towards the NE (~1-2 degrees), generally forming steeper slopes on the SW sides. However sharp margins occur also on the NE sides, sometime cutting abruptly the gently dipping surface. The shape of these features varies as for the dimensions, with observed lozenge, lobated and elongated ridge-like examples. Most interestingly, a group of these features presents an almost triangular shape, with one of the vertices aligned towards the SW and corresponding to the steeper slope. A last piece of the puzzle is given by their sub-surface composition. A few sub-bottom profiles, interpreted by Guillaume Michel in the Marine Geoscience Group, have shown that the feature are most likely composed of pre-Holocene deposits, most likely glacial diamictons, or even till. 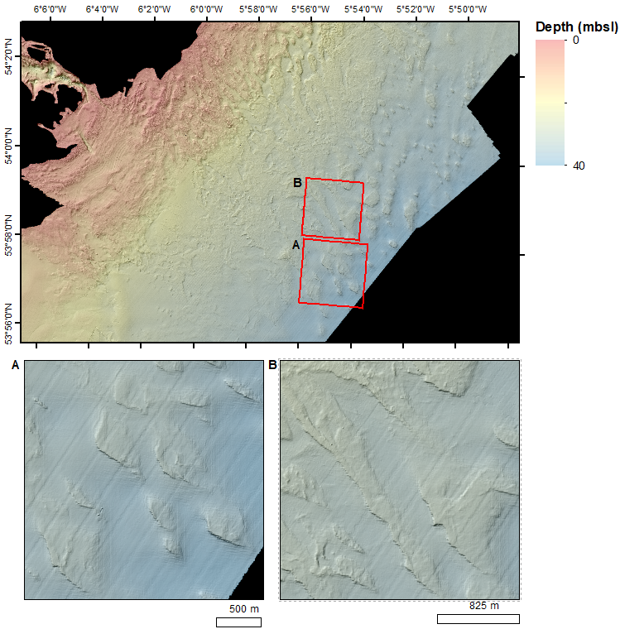 Previously unnamed subglacial hummocks characterized by a triangular or V shape have been recently added to the list of glacial geomorphological features (see title image, source: https://sites.utu.fi/reward/). These hummocks have been called “murtoos” (Ojala et al., 2019), after the Finnish locality where they were firstly (arguably) described. Generally, murtoos are triangular bedforms with a longitudinal axis of symmetry parallel to the ice flow direction and a tip pointing downstream. Murtoos have asymmetric longitudinal profiles with sharp and steep downstream edges and more gentle stoss slopes. Ojala et al. (2021) have subsequently suggested that five types of murtoos and murtoo-related landforms exist: lobated, chevron, murtoo-related ridges and other forms.These assemblages have been interpreted to form by a combination of erosion, deposition and deformation of water-saturated sediments and subglacial till when large volumes of meltwater are delivered to warm subglacial beds (Ojala et al., 2019; Peterson Becher and Johnson, 2021). Murtoo fields, forming parts of longer and wider meltwater routes, have been interpreted to represent small-scale transitional drainage systems between alternating channelized and distributed regimes, controlled by variations in the amount of meltwater (Ojala et al., 2019, Ojala et al., 2021; Peterson Becher and Johnson, 2021).

Can the Carlingford polygonal features be murtoos? The triangular shape and asymmetrical profiles seem to be conducive to this interpretation… however, there are several reasons for which this theory does not really hold. First off, when we look at the average dimensions of the Irish features we find that they are generally too big and not steep enough compared to murtoos mapped in Finland and Sweden (table below, left), moreover they do not really show the overlapping configuration that is so evident in the type locations. Secondly, if the point of the triangles indicates the direction of flow it means that ice flow was directed south-west at the moment of the formation. This is in contrast with the generally accepted ice margin configuration during deglaciation, which was in general parallel or semi-parallel to the modern coastline (McCabe, 2008, Knight, 2017). The explanation for these features has to be found elsewhere.

Along the coasts of Ireland we find several places where the topography is fragmented and irregular, one of the signs left by the fluctuating sea levels of the Quaternary period. A classic site is Clew Bay, where drumlins have been dissected and modified by tidal currents (figure below, right); more resistant stiff tills have formed “spinal ridges” on the drumlin relicts while multiple sediment source points are feeding flanking, fringing and bayhead barriers (see Carter et al. 1989). 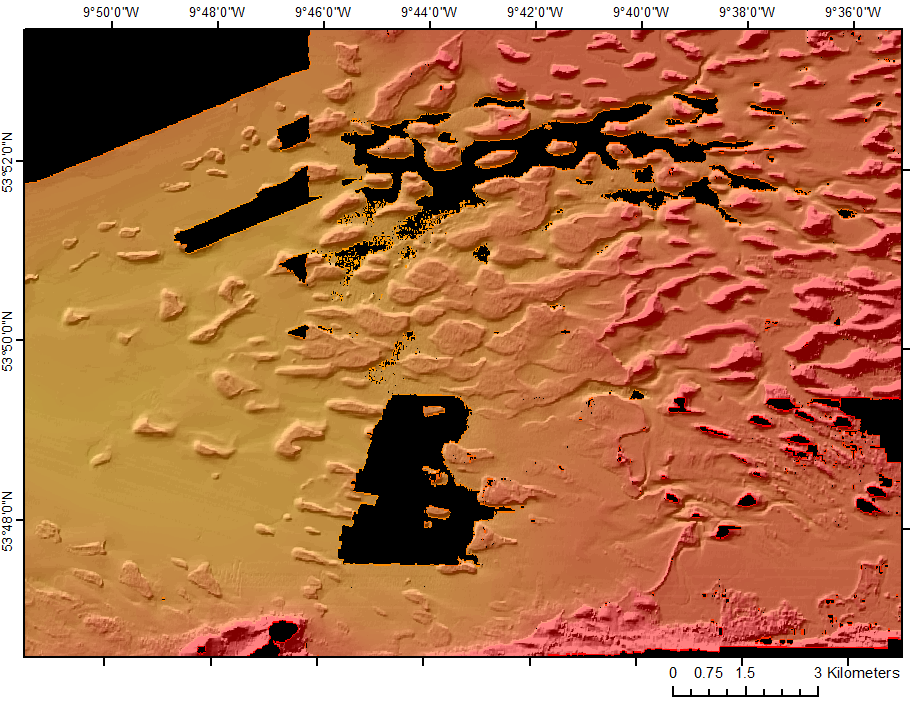 Even though the Kilkeel features are most likely not drumlins, it is quite easy to envisage rising sea levels after the Last Glacial Maximum, tidal action and channelisation creating a patchy seabed as the one we observe there. This supposition finds a confirmation in previous studies. McCabe (1986) tells us that Kilkeel stands on a proglacial outwash, where a diamicton apron was dissected by subaqueous channelling after the ice retreat.

The explanation for the peculiar polygonal pattern is therefore potentially less exotic than we thought originally. However, some questions remain: why the triangular points? And why are the sides of some features so regular and straight?

To answer these questions more pieces of evidence (sedimentological, geophysical) are needed, so we’ll have to wait a bit more. Until next time.