The Department of Digital Humanities is delighted that a number of its undergraduate students have been awarded various prizes in recent weeks. 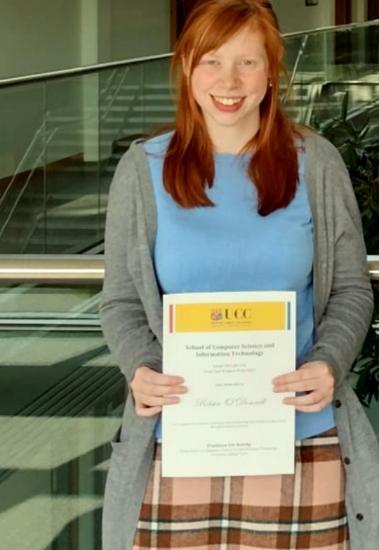 The award given to Róisín's project,  Developing Machine Learning Models that can Recognise and Respond to Human Emotions, is sponsored by Spearline. Róisín's project analyses and predicts human emotions and sentiment through the use of machine learning models, specifically, Facial Emotion Recognition (FER), a model which uses a Convolutional Neural Network (CNN), and a sentiment analysis model which uses Bidirectional Long Short Term Memory (BLSTM).

Edel Lonergan's final-year project, Military and the Merging of the Past and Present in Cork's Victorian Quarter, received a similar prize from the Horner Automation Group:
https://www.ucc.ie/en/dah/news/edel-longeran-wins-best-project-prize-at-open-day.html