As part of the proceedings, students were presented with a number of "best project" awards, chosen and generously sponsored by industry partners. Brenda Cooper, Operations Manager at Horner Automation Group, was in attendance to select the prize for Digital Humanities projects, which was awarded to Edel Lonergan. 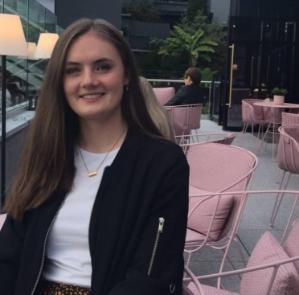 Edel's project, entitled Marriage, Military and the Merging of the Past and Present in Cork's Victorian Quarter, uses archival and mapping tools to compare the areas surrounding MacCurtain Street during 1865-1901, specifically from the unique perspective of a local soldier. The soldier in question, Corporal Robert Bradshaw, happens to be Edel's great grandfather.

Corporal Bradshaw was stationed in Cork for a short while during the reign of Queen Victoria, and through historical research and archival materials, Edel was able to compare the area as it is today to how it would have been experienced by her great grandfather at the close of the Victorian era. In addition to examining the history of many Cork buildings and streets, the project provided Edel with an opportunity to use research and digital tools to create a connection between her ancestral past and our collective heritage.

Edel Lonergan is a final year Digital Humanities & Information Technology student whose minor is Spanish. She has also served as the Online Editor for University Express, UCC's student newspapers, for the last three years. Edel will be joining Deloitte's graduate programme in September, where she will be a member of their Technology Consulting unit, based in Dublin.

Many other final-year students from CK118 have already put plans in place for September: Rachel McCarthy, who recently published in a leading peer-reviewed journal, has accepted a place on the University of Antwerp's Master of Digital Text Analysis programme, while Teresa Pascual Muñiz will be joining the Spanish and Catalan App Review team at Apple.