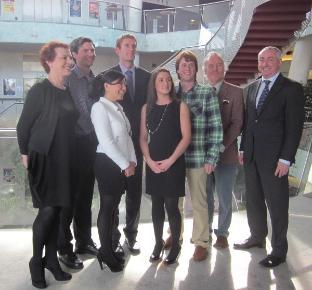 A project using plants to treat wastewater, as an alternative to traditional septic tank systems, has won a Cork researcher a national prize.

Fergus McAuliffe from the School of Biological, Earth and Environmental Science at University College Cork was taking part in the HEA/Irish Independent 'Making an Impact' competition in Dublin yesterday and came away with one of the top prizes.

Fergus is carrying out a PhD, under the joint supervision of Prof. Peter Jones and Dr. Padraig Whelan, which aims to use constructed wetlands to treat wastewater from houses.

Constructed wetlands are wetlands that have been engineered to clean our wastewater. The willow trees and soil in the wetlands use up the wastewater, preventing harmful pollutants such as phospates and nitrates from polluting our rivers and lakes. The work is particularly topical given the controversy over the proposed septic-tank inspection system.

The BEES student was one of two winners of the competition, the final of which took place at UCD on Tuesday. The five finalists gave a 10 minute presentation in front of an audience of second-level students and a Q&A session with a panel of judges.

Reacting to the news, Prof. Peter Jones, Acting Head of Plant Science at BEES said: "We're delighted with Fergus' success, in particular because it involves communicating our research to a very broad audience. It also demonstrates how important plants are in all our lives and how they can help build and maintain a sustainable, environmentally protective society."