BEES Scientist to give RIA Lecture 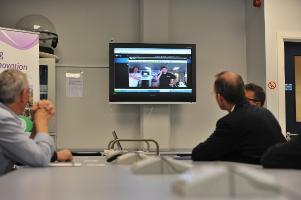 Andy Wheeler was Chief Scientist with the Irish-British VENTuRE scientific team that led a groundbreaking mission aboard the RV Celtic Explorer in the summer of 2011.

The mission was to investigate life at 3,000 metres below the surface of the sea on the 45 degree North MAR hydrothermal vent field using the Remotely Operated Vehicle (ROV) Holland 1.

As well as investigating the rich variety of marine life that thrives under such conditions, the expedition discovered a previously uncharted field of hydrothermal vents along the Mid-Atlantic Ridge – the first to be explored north of the Azores.

The work was filmed by the National Geographic and will feature in an upcoming "Alien Deep" documentary due to premiere in 2012.

In the meantime, Dr. Wheeler will be presenting a lecture at the RIA entitled "Alien World: New Discoveries of Exotic Lifeforms and Volcanic Metal Chimneys in the Deep Ocean" tomorrow evening at 6pm. Admission is free but you must prebook here.

Andy Wheeler featured in the Irish Times today, ahead of the lecture. You can read that article here.

Image: Dr. Andy Wheeler (on screen) speaks with Minister for Agriculture, Food and Marine Mr. Simon Coveney TD during a 'ship-to-shore' communication from the RV Celtic Explorer to the School of BEES during the VENTuRE mission.