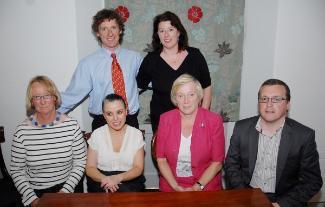 "We must use all the tools at our disposal: organic, conventional and GM to control to late blight of potato, a plant which has huge social, historical and economic importance for Ireland" according to BEES lecturer Eoin Lettice, speaking at a debate in West Cork this week.

The debate was part of an event to celebrate the potato, its history, social impact, science and impact on Irish agriculture. Organised by the Taste of West Cork Food Festival, the debate took place at Liss Ard House, near Skibbereen.

Eoin spoke of the impact the Late Blight-causing pathogen Phytophthora infestans has had on the potato through history and also the measures now used to control the disease: "We have a number of options for the future including the development on new, blight-resistant potato varieties. These varieties can be developed via conventional breeding methods: for example, Teagasc developed the highly successful Rooster variety via its breeding programme and that potato now accounts for about 50% of all potatoes grown in Ireland. Unfortunately it’s not fully resistant to late blight.

"Resistant varieties do exist and they are often employed in an organic setting: sarpo mira, blue danube, etc. However, consumers are reluctant to change from the traditional varieties and Irish consumers are incredibly loyal to their ‘own’ varieties".

The issue of genetically modified potato varieties was raised by a number of people attending: "A small-scale, well-designed, open and honest experiment such as this, conducted by a well-respected public body such as Teagasc is to be welcomed" according to Eoin Lettice.

Liss Ard Estate is also the location for a new MSc in Organic Horticulture which starts this October. The course will cover the scientific basis and practical application of all aspects of organic horticulture. For more information on the course, see here‌.

Irish Examiner coverage of the event.‌