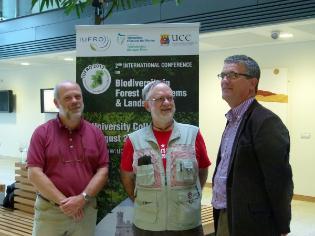 ‘Irish forests are critical to biodiversity and must be maintained and managed’ according to Professor John O’Halloran at the International Union of Forest Research Organizations’ held at University College Cork last week.

‘The uncertainty about future forest ownership and a slow in the rate of planting may mean a decline in biodiversity and some species of conservation concern, reliant on the forests’ according to O’Halloran  delivering his  keynote address at the international meeting.  This high-profile conference, which was jointly organised between UCC, IUFRO and the Department of Agriculture, Food and the Marine brought together scientists and practitioners from around the globe to discuss recent research and future directions. Delegates from more than 20 different countries attended a four-day programme of talks and field visits, putting an international spotlight on forest biodiversity in Ireland.

Forests covers approximately 30% of the Earth’s surface and are valuable to society for many reasons, including heritage, landscape, timber, recreational opportunities, climate change mitigation and biodiversity conservation. However, forest biodiversity is in a state of decline, and its conservation for future generations is a now global priority.

‘Forest biodiversity is not as prominent a part of the Ireland’s natural heritage as it is of most other countries. Although the majority of Ireland would once have been forested, Ireland’s forest cover was reduced over centuries by human activities. Forests comprise only about 10% of Ireland’s total land surface area, the second lowest level of any country in Europe’. The majority of these forests are conifer plantations established in the 20th century. Native woodlands are a small fraction of this forest estate, making up only about 1% of Ireland’s land area. ‘The forests are critical as habitats and also for so called ecosystem services such as carbon sinking and flood reduction’ according to O’Halloran.

Prof. O'Halloran talks about forest biodiveristy and the IUFRO meeting: