Penguin research features in National Geographic and on BBC 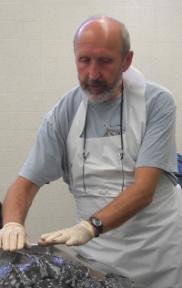 The November issue of the National Geographic magazine features and article on research carried out by Prof. John Davenport, former Professor of Zoology at UCC and an Emeritus Professor at BEES.

The National Geographic article is based on research into Emperor Penguin jumping which was recently published‌ by a team including John Davenport and Marc Shorten, UCC, Roger Hughes of Bangor University and Poul Larsen of the Technical University of Denmark. The paper proposed a novel hypothesis, that air bubbles released as penguins ascend out of the water form a lubricating layer, reduces friction and therefore speeds up the ascent.

The research will also feature in a BBC4 programme on bubbles to be broadcast in 2013.

This is the second occasion in recent days that BEES research has been featured by National Geographic. Research in the mid-atlantic on deep-sea vents was part of the Alien Deep episode broadcast last Sunday‌ on the National Geographic Channel.