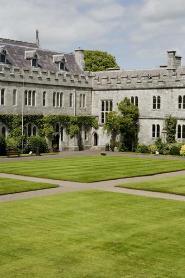 University College Cork (UCC) has been recognised once again by the Universitas Indonesia (UI) Greenmetric World University Ranking system for its exceptional work in the area of campus sustainability and environment-friendly university management.

Emerging among the top three universities from a packed field of 215 global competitors, the award reaffirms the ongoing commitment of UCC towards reducing its environmental impact and remaining a sustainable campus.

Now in its third year, the competition has seen a marked increase in entries to the ranking system, with 215 universities across 49 countries taking part. UCC is now ranked third in the world, ascending one step from its fourth place ranking of 2011. (Under the sub-category of “Urban Campus Setting”, it is ranked second). UCC is the only Irish education institution to feature in the top 50.

President of UCC, Dr Michael Murphy, said: “On behalf of University College Cork, I am delighted that our green credentials have again been recognised and that we are now ranked as one of the top three institutions worldwide. The result is a wonderful acknowledgement of the approach taken by UCC in the area of campus sustainability.”

Dr Murphy added: “UCC has already been ranked within the top 2% of universities in the world by QS earlier this year. It is a great honour to find ourselves now ranked in third place in the UI Greenmetric World University Ranking; a great start to 2013.”

UCC has been continuously recognised for its work in the area of campus sustainability over the last number of years. It became the world’s first Green Flag Campus for third level institutions in 2010, awarded by An Taisce and the Foundation for Environmental Education. UCC also recently joined forces with the Sustainable Energy Authority of Ireland, under its Public Sector Energy Partnership programme. This will see UCC take the lead in contributing to valuable and sustainable energy savings towards the national energy efficiency target of 33% for 2020.

UCC is also accredited as the world’s first third-level institution to be awarded the IS0 50001 standard in energy management. ISO 50001 enables organisations to establish the systems and processes necessary to improve energy performance, including energy efficiency, use and consumption.

UCC’s commitment to environmental education is reflected in its strong ‘green’ teaching and research agenda. A new initiative displaying the comprehensive nature of the environmental curriculum is the launch this week of the University-wide ‘Global Climate Change’ module. The module aims to give students and staff of the University a broad overview of the complexities of climate change by bringing together 20 eminent researchers from all four Colleges at UCC, half of them natural scientists and half humanities scholars and social scientists, to lecture on their fields of expertise. The provision of the module is a further example of UCC’s commitment to educating the next generation of environmentally aware global citizens.