The 20th Annual William Fry UCC Law Conference took place on 16th February 2021 from 9am to 1pm virtually for the first time. Months of preparation and organisation by the Conference Committee culminated in an engaging and insightful event, with 210 registrations across 4 countries, including 15 professional practitioners.

The virtual platform used facilitated the continuation of the UCC Law Conference as the largest student-run professional legal conference in Ireland.

The event began with an opening address from Minister for Children, Equality, Disability, and Integration Roderic O’Gorman TD, outlining Ireland’s progress on equality for marginalised communities thus far, and his department’s priorities in the area for the lifetime of this government. 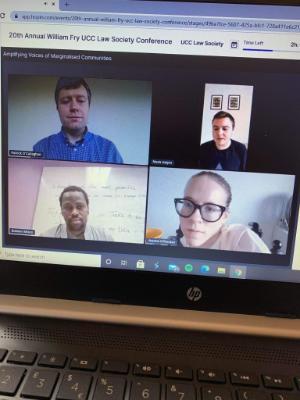 I then formally opened the conference with an address, before inviting chair of Panel 1 ‘Amplifying Voices of Marginalised Communities’ Dr Patrick O’Callaghan to begin the first discussion of the conference. Dr O’Callaghan, lecturer at the UCC School of Law, introduced this panel, consisting of disability rights activist and journalist Joanne O’Riordan, ThisIsMe Transgender Healthcare Campaign Founder Noah Halpin, and spokesperson for the Movement of Asylum Seekers in Ireland (MASI) Bulelani Mfaco (all pictured in the above photo).

Panel 1 saw guest speakers Joanne O’Riordan, Noah Halpin, and Bulelani Mfaco outline existing issues in Irish law acting as barriers to equality for marginalised communities in our society. Representative of these communities, the speakers shared their experiences as activists for disability, lgtbq and asylum seeker rights. Dr O’Callaghan moderated a thoughtful discussion with the speakers, touching on everything from existing issues, including transgender healthcare access and direct provision, to representation in the media and some of the speakers’ highlights in activism.

The break between panels facilitated a networking session on the Hopin platform, with ‘session’ booths set up and hosted on various topics for attendees to move between to network and learn more about the speakers, UCC Law Society, including the Women in Law Forum, and conference sponsors William Fry.

The speakers examined existing inequalities across the distinct areas of law, from economic inequality to the Climate Change ‘Just Transition’, to employment law. Overcoming technical issues, the conference ensured the speakers were able to give attendees an expert insight into these specific areas of law, crucially touching on present trends which will lead to future exacerbation of inequality unless addressed. The speakers in this panel, by giving an expert overview of the state of affairs regarding specific areas of law and its effect on those marginalised in our society, provided an interesting contrast to the speakers from the previous panel, who spoke from the perspective of the marginalised community themselves.

In hearing from both panels, attendees would have heard of the current state of the law and where it seems to be heading, complemented by an assessment of how this law is directly affecting those marginalised communities, and what direction it needs to move in to remove existing barriers to equality.

Dean of the UCC School of Law, Professor Mark Poustie, kindly concluded the event with his closing address, thanking all those who contributed to making the event a success in a challenging academic year.

The Conference Committee would like to thank the UCC School of Law, William Fry, the UCC Law Society Executive Committee and Members for their support in facilitating the move online for the first time in its twenty-year history. 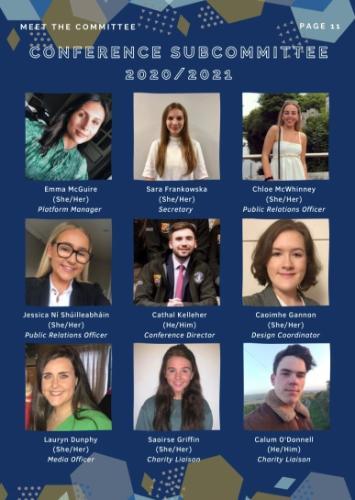 Speaking as Conference Director, little did I think upon being elected to the role in March 2020 that we would be holding the event fully online eleven months later. It is strange to think that I have yet to meet the committee all together in person, having never met some members in person at all!

The loss of the in-person element, both for the event itself and its promotion, required a re-think and an overhaul of the structure and promotion of the event. I was fortunate to work with an extremely capable and hard-working committee to dramatically increase our social media presence to counteract the loss of on-campus promotion, identify and set-up a suitable online platform, and host a number of online fundraisers for our charity partners.

We were proud to build on the charitable aspect of the conference this year, particularly in a challenging time in which the pandemic has served to expose and exacerbate existing inequalities for marginalised communities in Irish societies. We successfully raised €2,500 to be split between our two partner charities, Cork Penny Dinners and MASI. Through both this donation and the discussions facilitated in the event itself, we hope the 20th Annual Law Conference and first virtual edition will have a lasting impact on our charity partners and attendees alike.