On Saturday 22nd February the UCC School of Law and the UCC Law Society were represented at the Irish round of the Philip C. Jessup International Law Moot Court Competition.

LLM student and member of the team, Benjamin Harrington, shares his reflections of the day.

The Jessup is arguably the most prestigious and certainly the largest moot court competition in the world, drawing teams from over 100 jurisdictions to test their teamwork, research and advocacy skills in diverse areas of international law. The competition begins with national rounds where teams compete for the chance to represent their country at the international rounds in Washington DC, which are sponsored by White & Case.

This year the Case Concerning the Helian Hyacinth raised issues of State succession to treaties, autonomous weapons, conflict with non-State actors, competing jurisdiction between the World Trade Organisation mechanism and the International Court of Justice, and the immunity of Foreign Ministers from arrest on foot of a warrant of the International Criminal Court.

The UCC team was made up of Eve O’Shaughnessy (BCL Law&Bus II), Max Philpott (BCL Law&Bus II), Stephen Wilson (LLB I), Cárthach Ó Faoláin (BCL GA IV) and Benjamin Harrington (LLM ENR). The team is hugely grateful to have been coached by Professor Mark Poustie, Dean of the School of Law, who has an excellent track record with teams at Shanghai University of Finance and Economics and the University of Strathclyde. The team spent several months researching and drafting the memorials before submitting them in January. The oral round was held in the Four Courts, where UCC faced teams from Griffith College Dublin, the Law Society of Ireland and the Honorable Society of Kings Inns. The Law Society of Ireland were the ultimate victors and also took the award for Best Memorials. Conor Rock (Kings Inns) was awarded Best Oralist for his stellar performance in the final.

Special thanks to Eoin Burke (Moot Convenor, UCC Law Society) for his support, all the judges for giving their Saturday, Eoin Murphy and his team for their excellent organisation and DLA Piper for their generous sponsorship of the national round.

"It was an absolutely fantastic and very unique experience. The chance to learn about international law and apply it in such an interesting context was an incredibly interesting process. Having the opportunity to moot in the Four Courts was also incredibly memorable, and I feel it was an experience that will greatly aid my future studies."

Team coach and Dean of the School of Law, Professor Mark Poustie, added:

"Mooting is a fantastic skill to develop.  It really can give you an insight into how cases are prepared and delivered.  It gives participants excellent experience in thinking on their feet in responding to questions from the bench!  The Jessup International Law Moot is one of the leading mooting competitions globally and it is great that UCC are taking part and I’d like to encourage students in the School to participate in next year’s team.  Finally, I’d like to congratulate UCC’s team.  Although we didn’t win, we put up a very good performance to which all team members contributed fully.  I am proud of your performance which was a credit to the School!" 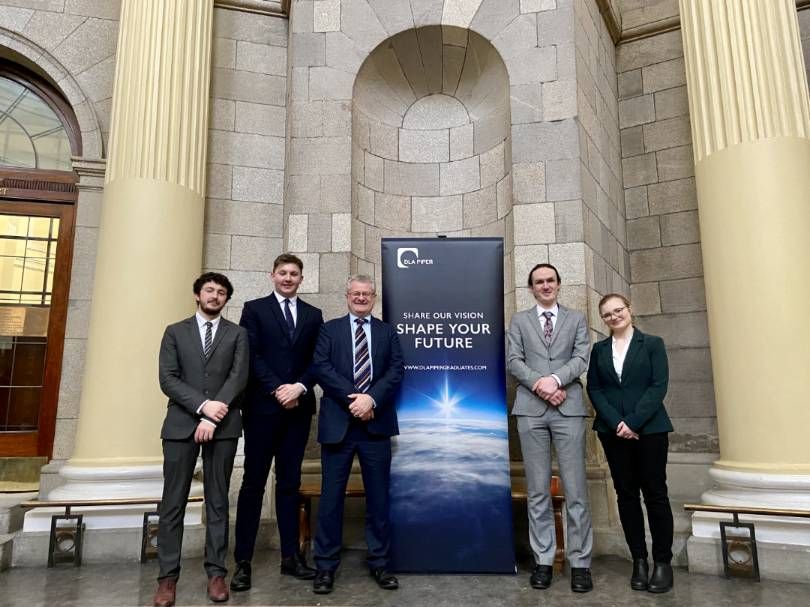 If you’re interested in representing UCC at next year's Jessup you can learn more at https://www.ilsa.org/about-jessup/.

(The problem will be released in September and the sooner work begins the better so register your interest for the team in advance with UCC Law Society (moot@ucclawsociety). While previous knowledge of international law would be an advantage it’s certainly not necessary as only one of the team this year had studied the area prior to the competition but the whole team was soon engaged in nuanced debates on the law!)