The competition tests students’ knowledge of the laws of war, and their practical application through a series of challenging scenarios, including guiding a military patrol through an urban warfare setting in the video game Arma III and responding in real-time to make the correct decisions on the use of force, and representing the International Committee of the Red Cross (ICRC) in negotiating humanitarian access to civilians in an armed conflict.

The competition also provided an opportunity for all the participants to reflect on the horrific impact of war on civilians in many places around the world, including in Ukraine, Syria, Yemen, Afghanistan and Ethiopia. 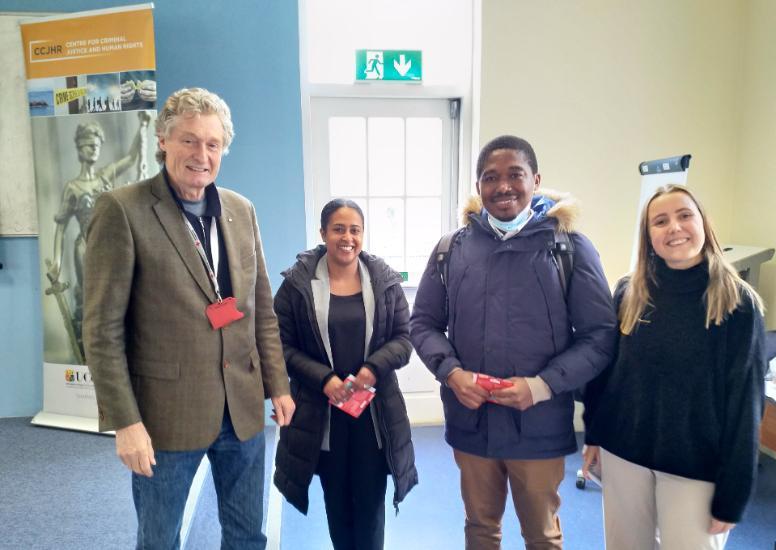 The teams taking part in the competition came from NUI Galway, Trinity College Dublin, the Law Society and UCC. Two teams of UCC students, who are currently undertaking the LLM in International Human Rights & Public Policy, represented the School of Law. We would like to congratulate Belen Moges, Estelle Casadesus and Hassan Kallon who were awarded second place following their well-argued moot court presentations, acting as the defence counsel in a case before the International Criminal Court. The second UCC team of Katie Place, Nada Ouhaddad and Dylan Lee also highlighted their high level of knowledge and understanding of the laws of war. The teams were mentored by Dr Dug Cubie, Dr Luigi Lonardo and Dr Marie Aronsson-Storrier, and the judges included representatives from the Irish Red Cross, the International Committee of the Red Cross, the Irish Defence Forces, the judiciary and a former UCC Corn Adomnáin winner.