An analysis of the lithic assemblage from Slieve Breagh, Co. Meath 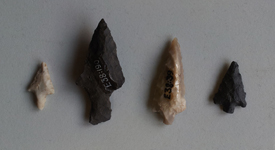 The cluster of sites at Slieve Breagh, within the rich archaeological landscape of Co. Meath, was unknown until first noted by Seán P. Ó’ Ríordáin in the 1940s. A short survey was conducted where 30 sites were recorded at the time. Another survey was undertaken in 1956 by Ó’ Ríordáin and group of his students which noted a further 32 sites in the area. Between 1960-1962, a limited number of excavations were undertaken at Slieve Breagh. These excavations produced evidence for Neolithic and Bronze Age settlement. The excavation produced finds of pottery, iron slag, a glass bead, a sliver coin as well as broad range lithic material comprised of flint, chert and quartz. The lithic assemblage from Slieve Breagh consists of delicately manufactured arrowheads, a variety of scrapers, quartz/crystal points, flake debitage and a number of hammerstones The pottery and architectural evidence from the Neolithic huts places the earliest dating of this site from the Grooved Ware period of c. 2900 BC.  No final excavation report has been published on the site, and therefore the lithic assemblage has not been fully analysed or catalogued.

The intention of this research is to use conventional methods in lithic recording. The analysis of the Slieve Breagh assemblage will include the cataloguing of the material, illustrate the assemblage, and to conduct attribute analysis. The research will also hope to highlight procurement strategies for obtaining raw materials by examining the geologies within the region. A field walking exercise will hope to be conducted in Spring 2013 over a two-day period near the site. This will attempt to recognise any comparisons in the presence of any lithic scatters, the types of raw materials and lithic types to the assemblage. Comparisons to other lithic assemblages from Co. Meath will also be included in the research in order to develop a greater understanding of the Slieve Breagh assemblage within wider contexts.