Interpreting Early Medieval Irish Mortuary and Ritual Sculpture: A Study of Iniscealtra and its Clare/Limerick Hinterland 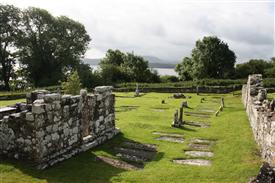 This research illuminates the ideological, religious and socio-political forces which were at play when commissioning early medieval Irish sculpture. The body of material under deliberation includes cross-slabs, plain grave-slabs, crosses of various forms and other carved stone miscellanea, such as cross-inscribed quern stones, gable finials and sundials. It investigates how such sculptures, indicative of evolving beliefs and ritual practice, expressed power, social status, identity and transtemporal memory. The study region converges on the ecclesiastical island complex of Iniscealtra in Co. Clare, which boasts one of the largest collections of in situ grave-slabs from early medieval Ireland. The site thus offers a unique insight into the employment of the slabs in the performance and negotiation of memory-work, as their typographical arrangement within the principal cemetery on Iniscealtra encourages compelling theories regarding processional and pilgrimage activities. These events served to ensure the physical survival of the grave-markers and to further maintain, re-work and project their associated memories, by endowing them with new significances and meanings, while underlining a palimpsest of links to the past.The collection is considered in the context of a wider study of the sculpture of counties Clare and Limerick.

Iniscealtra, located in the heart of the Uí Briain kingdom, was one of the longest-established ecclesiastical sites within their immediate territory. When exploring the circumstances which facilitated the development of its prominent sculptural workshop, the abundant documentary evidence for this region, coupled with a wealth of archaeological data, presents an extraordinary backdrop against which the sculpture is placed. Analysis targets the physical experience of the stones, querying with whom they were socially and culturally associated. The generation of a large quantity of sculpture on the island was bound up with a political agenda by the Uí Briain to forge a link with Iniscealtra’s illustrious past by rewriting themselves into local perceptions of the site’s historicity through sculpture commission. It is argued that by reifying such symbolic affiliations, these distinctive markers were exclusively identifiable with Uí Briain familial status or served as statements of dynastic allegiance. The study looks at how the pieces were perceived and ideologically transformed over time by the various strata of progressive mnemonic societies. These politically-active creations revealed anticipation of future assembly, by providing a context for the accumulation of burials and repeated acts of competitive communal commemoration. The study therefore recognises the need to reinterpret the role of these important stone sculptures in their realisation of a perpetuating locus for legitimating and sustaining spiritual and temporal authority, inherent in the social dialogue of the period.

Through a synthesis of excavation evidence from a variety of cemetery site-types throughout Ireland, the multifarious actions taken by early medieval communities in burying and commemorating their dead are determined. A systematic review of the evolution and aesthetic development of the diverse forms of early medieval grave-markers is established by utilising art-historical data, linguistic/epigraphical evidence and contextual information.

Grave-markers operating as ‘technologies of memory’ are defined by context-specific constructs. Their production was intrinsically linked to shifting patterns in the nature of remembering the dead, resultant of wider developments, for instance the eleventh/twelfth-century pan-European church reform, for which the Uí Briain were the chief secular advocates of the agenda in Ireland. Functional analysis of the sculpture considers altering beliefs and modifications in ritual performances. Alterations in private prayer, penitence and penance in light of evolving perceptions of the afterlife, especially those pertaining to purgatory, gradually transformed the physical and conceptual character of the stones, as well as their application and location. In turn this line of investigation provides innovative insights into changing funerary, commemorative, devotional and liturgical practices in early medieval Ireland.

This study is funded by Irish Research Council and CACSSS (UCC)