The Department of Pharmacology and Therapeutics, hosted a morning research seminar on Thursday 27th June 2019, with guest speaker, Dr. Grant Churchill, from the Dept of Pharmacology, University of Oxford, UK

Dr. Grant Churchill is a Scientific Founder and Consultant for IntraBio Inc. His main research has been guided by the unifying concept that small molecules can be designed and synthesized to probe biological functions. Inspired by his research on chemical structure-activity relationships for the plant hormone abscisic acid, Dr. Churchill has developed this concept over his career through chemical synthesis, and in silico and physical screening to make and identify chemical tools such as Ned-19, which continues to open new possibilities for the treatment of numerous diseases. More recently, he has used drug repurposing to identify the shelved drug ebselen as a lithium-mimetic, which is now entering Phase 2 efficacy trials for bipolar disorder.

Abstract: I will provide a narrative of repurposing a known drug as a lithium mimetic and highlight the promise and pitfalls of this strategy. Although lithium remains the gold standard for treating bipolar disorder, its unwanted side effects and toxicity make it desirable to have a ‘lithium mimetic’, that is, a drug with the good without the bad. One putative therapeutic target for lithium is the enzyme inositol monophosphase, which acts as a bottleneck in a stimulatory signalling pathway. Using this enzyme in an in vitro assay, we screened drugs with a history of experimental use in man, but never marketed, and identified ebselen. We found that ebselen exhibits lithium-like effects in mouse models of mood disorder and decreased brain inositol levels. As ebselen had been tested in man for stroke and has known pharmacokinetic and safety profiles, we were able to translate ebselen into man and found effects on emotional processing and impulsivity. Moreover, ebselen decreased brain inositol as measured with magnetic resonance spectroscopy (1H-MRS), consistent with drug target engagement. Ebselen is currently being tested in a phase 2 efficacy trial for bipolar mania in Oxford with support from The Stanley Foundation and an American biotech company. More broadly, ebselen is an antioxidant and there is much pre-clinical data to suggest it might be effective in many neurological disorders including Alzheimer’s, Parkinson’s and amyotrophic lateral sclerosis. 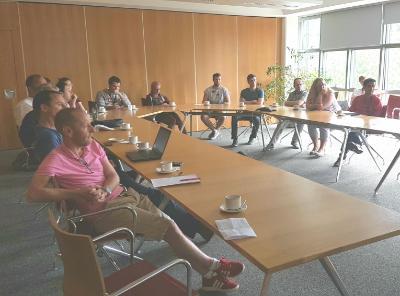