A new study uses sophisticated particle accelerator X-ray maps to reveal the internal anatomy of fossils up to 280 millions of years old.

The chemical information is locked up in fossilized melanosomes – microscopic granules of melanin. The new results show that despite the damaging effects of the fossilization process, melanosomes in many fossil vertebrates retain tissue-specific signals, allowing internal anatomy to be reconstructed. 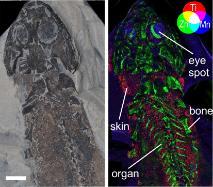 The team studied the chemistry of preserved melanosomes in 21 fossils from localities around the world, including Europe and China. Some of the remarkable details evident in the X-ray maps include the different chemistries of the gills, eyespots, skin, and internal organs such as the liver and kidneys. 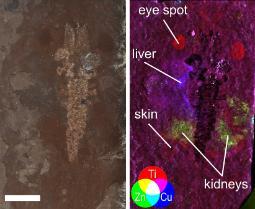 – can also show good chemical preservation”, said Ms Rossi. In fossils from many other localities, traces of original melanosome chemistry have been destroyed.

Senior author Dr McNamara said, “This new study emphasises the fact that fossil melanosomes have the potential to make much broader contributions to evolutionary studies than previously thought. Ten years ago, palaeontologists were using melanosomes to estimate the colours of ancient creatures. Now we know that fossil melanosomes can track changes in physiology, help discriminate between different species, and reveal internal anatomy. What next?”

The study is published today in the journal Scientific Reports.