Holy Oily Bodies: Surrealism, Women and the Elixir of Life

Arcane 17, the Surrealism-founder, André Breton’s 1944 vision of rebirth steeped in hermeticism took inspiration from the seventeenth card of the tarot, ‘The Star’, traditionally pictured as a semi-naked woman, against a backdrop of stars, pouring one urn onto water and another onto land. The poet’s post-war recourse to a symbol of hope, renewal and resurrection bound up in the life-giving properties of the female body and rooted in the legend of the Holy Grail was deliberate. This discussion will centre on visions of rebirth depicted by two female Surrealist artists, Leonora Carrington and Remedios Varo, described by Breton as the leading lights in Surrealism in the late 1940s, both of whom drew inspiration from symbology linked to reproduction, rebirth, and the Grail vessel. While Breton could be lauded for advocating the metaphorical and social elevation of women, it will be argued that he failed to capture the complexities of female identity which Carrington and Varo investigated in their Mexican works, including the co-authored play El Santo Cuerpo Grasoso. This paper will therefore consider the very distinct ways in which Carrington and Varo turned to Grail imagery to paint the multifaceted nature of female identity and sexuality, and the extent to which these works, like Arcane 17, functioned on an esoteric and an exoteric level, calling for power to be placed in the hands of women. 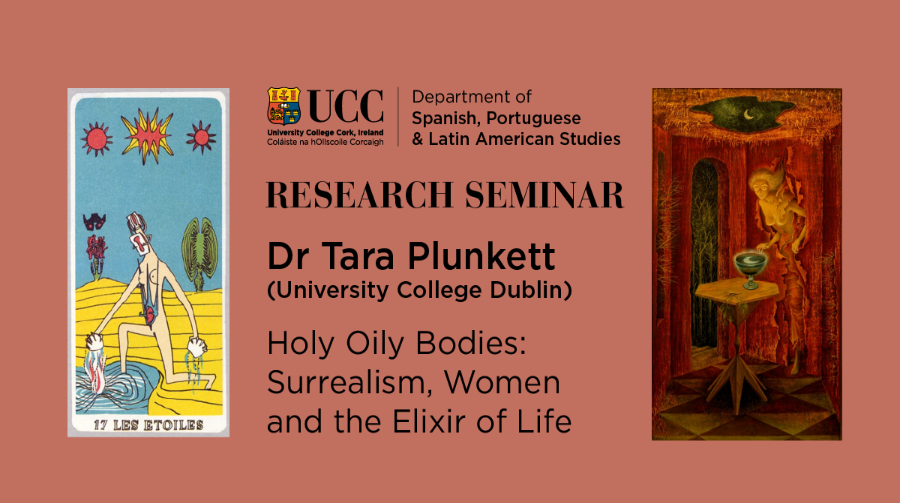 Dr Tara Plunkett’s research focuses on Spanish and Latin American artists' use of the Surrealist aesthetic in works of self-fashioning. In investigating canonical figures such as Federico García Lorca and Rafael Alberti in tandem with lesser-known painters like Remedios Varo and Leonora Carrington, her research traces a chronological and geographical evolution of self-fashioning on the margins of Surrealism. She is particularly interested in the motif of the hybrid body and how it relates to a shifting subjectivity.

As co-editor of Preservation, Radicalism and the Avant-Garde Canon (Palgrave Macmillan, 2016) she has also been investigating the ways in which avant-garde cultural production is canonised, classified and curated. In 2014 she curated an exhibition of works by local Irish artists inspired by women of the Spanish and Latin American avant-gardes, Out of the Ordinary: Contemporary Visions of the Avant-Garde at the Naughton Gallery, Belfast.

Her teaching has thus far focused on Surrealism in Spanish image and text, also offering a module on the Cinema of Pedro Almodóvar that is structured around presentations of masculinities, femininities and identities that blur the boundaries between male and female, human and animal. She has also delivered courses on Hispanic Cultures and Societies that introduce students to the link between society and cultural production from youth protest movements in Spain to the Chicano movement in the United States.