This has been a stellar rise from rookie to senior AFL for Mark who is only in his first season playing Aussie Rules and who has only played four games of reserve football with Geelong. You can view Mark's press conference and see how he found out about his senior selection below. Fantastic achievement Mark!!! 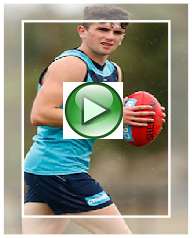