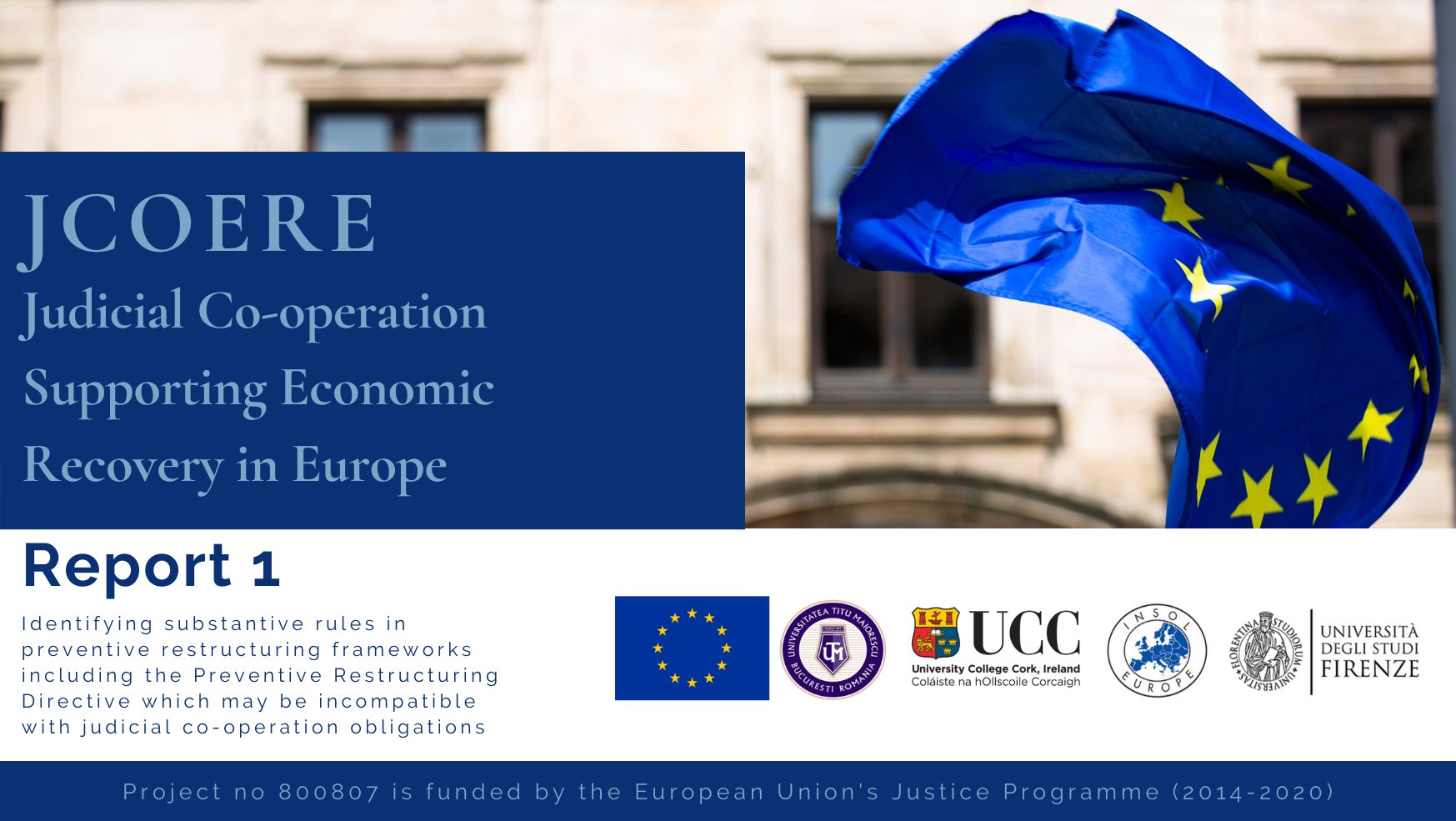 The JCOERE Project, funded by the European Commission’s DG Justice Programme (2014-2020), addresses two aspects of the EU’s strategy to respond to the problems of cross-border insolvency within the increasingly integrated internal market. The Commission’s strategy is described in the Recommendation setting out A New Approach to Business Failure. The first aspect concerns the implementation of co-operation obligations that have been imposed on all EU domestic courts and judiciary under the EIR Recast. The second concerns the introduction through the Preventive Restructuring Directive (PRD) of a preventive restructuring framework in the domestic insolvency laws of all Member States.

This first JCOERE Report examines these initial substantive and procedural aspects arising from the preventive restructuring frameworks. This, together with JCOERE Report 2, will contribute to answering the overall project research question, which asks:

JCOERE project Report 1 (reflecting the goals of Workpackage 2 of the Project) will accordingly concentrate on the nature of substantive and procedural aspects that may arise in complex preventive restructuring or rescue regimes as envisaged by the PRD. The Report also focuses on identifying substantive doctrinal and procedural restructuring rules relevant to court-to-court, and to court-to-practitioner co-operation obligations described in the EIR Recast Regulation 2015/848. The Report includes an analysis of pre-existing systems, such as the Irish Examinership process, the French sauvegarde, and the Spanish and Austrian reorganisation and restructuring procedures. In addition, the approaches of other jurisdictions included in the Project Consortium, namely Italy and Romania, will be discussed. In view of the anecdotal evidence of its influence on the drafting of the PRD, and given its popularity of a restructuring destination, the UK is also considered as a benchmarking exercise.

The comparative analysis was extended to other jurisdictions, for example the Netherlands, because of its timely and pre-emptive response to the PRD, and Germany, Poland and Denmark.

Country reports have also been created for each of the eleven participating jurisdictions in Report 1, giving information on the preventive restructuring and insolvency law in the respective jurisdiction. Please click here or on the sidebar to dowload the country reports.

The Report is also available to download as a single PDF document, from UCC's institutional data repository, CORA. Please click here to download the Report from CORA.