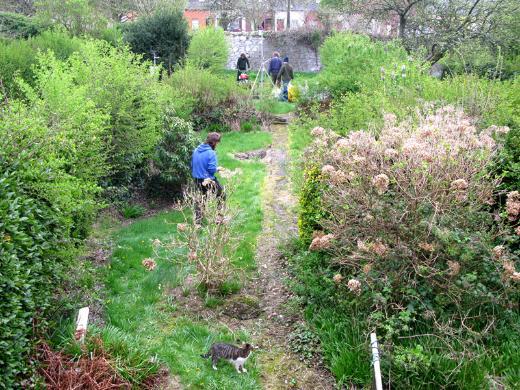 In the spring of 2011 we dug a plot for vegetables and herbs in the garden behind the Philosophy Department at 3 Elderwood. Adam Loughnane (who is writing on Nishida and Merleau-Ponty), Chris Cappelletti (working on Dōgen and Bergson), and Graham Parkes were invaluably assisted by Paddy Frankel, who has a beautiful organic farm in Doneraile, and Kazunori Maruse, who was living and working there at the time. Margaret Twomey (ecotheology with a comparison of Eriugena and Kūkai) brought to the garden the benefits of her experience of working on a small organic farm for many years.

‌‌Paddy brought not only bags of fresh horse manure but also trays of seedlings for chard, spinach, broad beans, onions, lettuce, rocket, and strawberries, to which we added lettuce, parsley, garlic and some herbs. Barty Begley (Hegel and Nishitani) brought more horse manure in from his farm, and a frame for a compost heap which, though small, is decomposing nicely, for the sake of next year’s growth.

While we lost a small portion to our insect neighbours, the fruits of our labours came forth in splendid vegetal abundance. We did, however, lose with the strawberries, where the final score was: 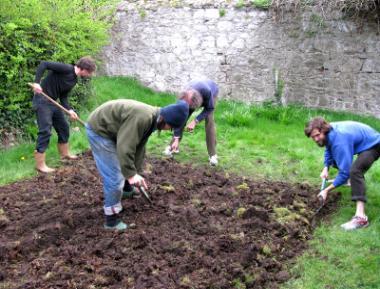 It’s not just that everything from the garden can be picked and prepared and eaten within a few hours, which makes for a delicious freshness, but also that the garden is a wonderful place to sit by, when the weather permits, in the late afternoon sun and the quietness that the location behind the Philosophy Department affords.

The garden pretty much peaked and expired by the time of the launch of the IJS in September 2011, but we’re going to clear out, churn up and set down a winter garden with chard and purslane and other, more hardy species.