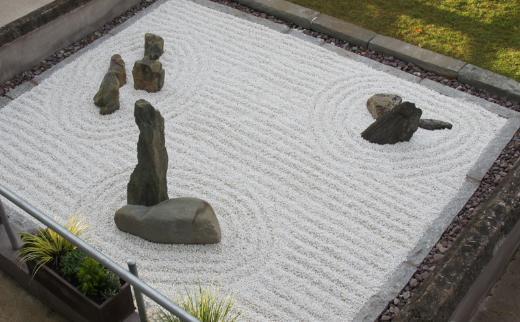 This garden, laid out and set up in September of 2011, is an example of the ‘dried landscape’ style that was developed in the Zen Buddhist temples of fourteenth-century Japan. The ‘dried’ means that all features dependent on water (such as plants) are excluded, no form of life is granted a roothold, so as to bring into relief the landscape‘s skeletal structure. The Japanese word for ‘landscape’ (山水, sansui) literally means ‘mountains-waters’, and so the rocks in a sense stand in for mountains, and the gravel with its changing wave patterns for water. Containing rocks from the region, the garden should thereby evoke a real local landscape—in this case, the coast around Cork.

The rectilinear granite-kerb ‘frame’ and austere gravel cut out natural life (such as grass, flowers, bushes) from the garden altogether. Further, the frame’s straighter lines contrast with the rounded sandstone pebbles adjacent to them, which by suggesting waters mediate between the dryness of the garden and the lushness of the grass and plants around it.

By contrast with the garden’s setting within the context of the natural landscape of the UCC campus, which changes with the weather and seasons, the stone within the frame appears unchanging. The stone in Japan’s older gardens has, after all, outlasted many generations of vegetation (not to mention human beings), but of course it, too, is subject to the central condition of the Buddhist world, which is impermanence. The rocks may last long—these ones are some 400 million years old already—but they won’t last for ever. 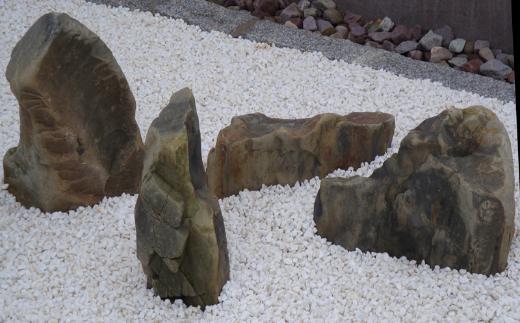 Although it was Zen Buddhism that produced the consummate examples of the dry landscape style, the white gravel is borrowed from the indigenous Japanese religion of Shinto, being used there to create a sacred space adjacent to a palace or temple, by exerting a purifying influence. The wave-form rakings of the gravel lend it a more fluid appearance, and since the patterns can always be changed, its flow contrasts with the apparently steadier rocks within it.

The austerity of the rocks’ surroundings enhances the appearance of their own peculiar kind of life. The East-Asian traditions don’t make our dichotomy between animate and inanimate: for them, all phenomena condense out of and dissolve back into the field of energies known as qi, 氣, in Chinese (ki, 気, in Japanese). Rock is regarded not only as ‘bones of the earth’ but also as ‘kernels of earth’s essential energies’. To appreciate this requires a conceptual shift: understanding rocks not as lumps of matter but as configurations of qi energies at their densest and slowest moving. This enables a perceptual shift toward regarding rocks as expressing the forces that formed them and the energies still shaping them from without and within.

Following the model of the classical Chinese garden, the dry landscape garden in Japan uses stone for both its frame and focal points—as if the apparently lifeless rock containing the garden also spontaneously irrupts, enlivened, into its interior. The point is less that some of the rocks in the landscape garden look like mountains, than that they express those powerful energies that can thrust the earth thousands of metres into the heavens. 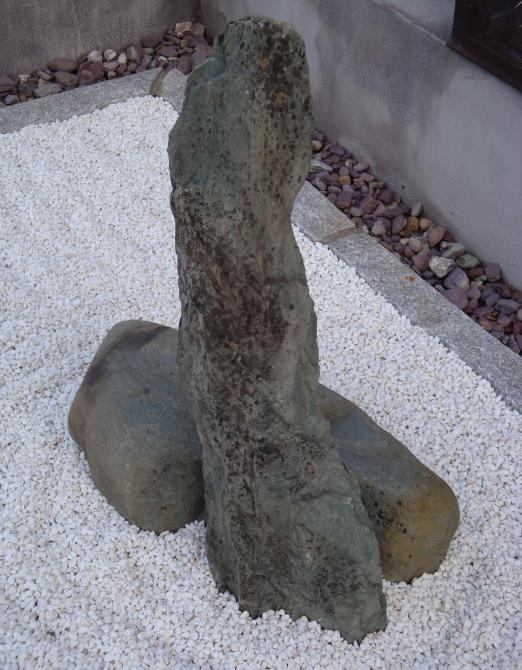 After the design of the frame and choice of materials and rocks, there is no further planning. The point is to get to the heart of the stone—what the Japanese call ishi-gokoro, 石心, the rock heart or soul—so as to be guided by the rocks in their own placement. By paying careful attention to the stone, one may realise how the rocks need to be in relation to each other.

For the great Japanese Buddhist thinkers Kūkai (9th century CE) and Dōgen (13th century), natural landscape in the form of mountains and waters may be experienced as the body of the cosmic Buddha. What is more, this Buddha is constantly expounding the Dharma (teachings) through sermons in sound and visible scriptures—although ‘for his own enjoyment’, so that such sermons and scriptures require practice to be heard and read. If we learn to listen with the ‘third ear’, we can hear ‘the sounds of the mountains and river valleys as a teaching on the Buddhist notions of impermanence and interdependent arising. The imagined waters in the dry landscape garden may speak to us in the same way.

If we practise looking through the ‘third eye’ of the imagination, we may begin to understand what is written in rock, the intimations of meaning from its shadings and patterns. Insofar as the dry landscape garden highlights the life of stone and alludes to the embodiment of the cosmic Buddha, it can serve to enhance environmental awareness and ecological understanding.

While the traditional Japanese garden (with its ponds, bushes, flowers, grass and trees) is best seen in bright sunlight, the dry landscape garden is at its best—paradoxically—in the rain, when the moisture brings out the saturation of the rocks’ colours. Or, even better, in the late afternoon sun after an autumn shower 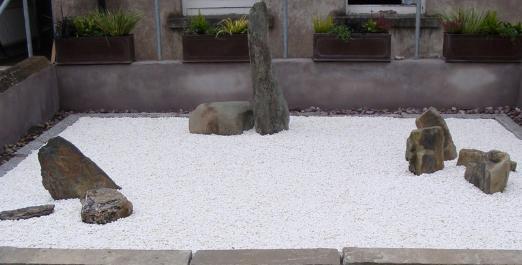 Left Group. On the left are two marine mudstones from the coast south of Cork, the smaller containing nodules of iron, and on the right a sandstone with a vein filled with the mineral quartz. All three date from the Carboniferous Period, around 350 million years ago.

Right Group. Four marine siltstones (also Carboniferous in age) that were subject to high levels of compression during mountain building and then eroded by recent wave action.

Middle Group. Two green continental sandstones, somewhat older (Devonian Period) than the other rocks, from the Beara Peninsula. This couple represents Hōraizan, the largest of the ‘Isles of the Immortals’ in Daoist legend—a formation usually built in the pond of a Zen temple garden, but here lodged in dry waters. The taller is the so-called ‘master rock’, which by virtue of its energetic power is meant to order the positions of the others.

Parkes - The Role of Rock in the Japanese Dry Landscape Garden